Author’s comment: The link below leads to the Russian medium “Sputnik”. But Olivia Kroth never wrote for “Sputnik” or “Ria Novosti”. She was an author for “The Voice of Russia”, which was unfortunately abolished. Meanwhile, the new editors have destroyed all of the articles that were published in the “Voice of Russia”. I call this the self-destruction of the culture of a nation.

Seventy years ago, in the summer of 1944, the Soviet Union launched Operation Bagration, a large-scale, complex offensive against the Nazi invaders of Soviet territory in Byelorussia, Poland and the Baltic republics. From June 22 to August 19, the Red Army drove the Nazis out, annihilating their Fourth Army and two Panzer armies. Thirty Nazi divisions were destroyed, another thirty crippled. The Germans lost 350.000 men, 160.000 prisoners died on the way to prison camps, 57.000 prisoners were paraded in Moscow. Operation Bagration was Hitler’s worst military defeat in WW II. It broke the Wehrmacht’s backbone and helped to overthrow Hitler’s «Reich», which lasted barely more than a decade instead of the promised 1.000 years. For their offensive operation the Red Army used 118 rifle divisions, 13 artillery divisions, 6 cavalry divisions, as well as 8 tank and mechanized corps. More than two million Soviet frontline and support troops took part. Over one million tons of ammunition and supplies were needed. The Soviet troops were assisted by nearly 11.000 artillery pieces, 2.300 Katyusha multiple rocket launchers, 2.300 fighter planes, 1.800 Ilyushin Il-2 ground attack planes, 650 medium bombers and 430 night bombers.  The code name «Bagration» referred to General Pyotr Ivanovich Bagration (1765-1812), a Georgian prince. He participated in the Napoleonic Wars and was buried on the battlefield of Borodino near Moscow, where he died fighting in September 1812.

Maskirovka was successfully applied in Operation Bagration. The term can be translated as military camouflage, deception, disinformation. The word is defined in the Soviet Military Encyclopedia as «means of securing combat operations and daily actitivites of forces; complex measures to mislead the enemy regarding the presence and disposition of forces, military objectives, combat readiness and plans.» This doctrine, developed in the 1920s, became an integral part of the Soviet Field Regulations for the Red Army (1929): «Surprise has a stunning effect on the enemy. For this reason all troop operations must be carried out with the greatest concealment and speed.»

Operation Bagration fooled and wrong-footed the Wehrmacht on Soviet territory, making them believe that the battles would take place in Nazi-occupied Ukraine. As they found out to their surprise, the operation was carried out further to the north, in the Baltic area, Byelorussia and Poland. This explains the high number of Nazi troops trapped and killed, as well as their enormous losses of material and equipment.

Ivan Khristoforovich Bagramyan (1897-1982), of Armenian origin, was a Marshal of the Soviet Union, decorated with the title Hero of the Soviet Union for his achievements in Operation Bagration. In 1954, Marshal Bagramyan became Chief Inspector of the Soviet Ministry of Defence, and later Deputy Minister of Defence. Furthermore he worked as co-author of books about Soviet strategic military operations. After retiring he wrote his memoirs and published them in three parts. Marshal Bagramyan is buried in the Kremlin Wall Necropolis of Moscow.

The First Byelorussian Front, created in October 1943, was commanded by General Konstantin Konstantinovich Rokossovsky (1896-1968), of Polish origin, born in Warsaw. He also became a Marshal of the Soviet Union. After the war he served as Defence Minister in Poland and was buried in the Kremlin Wall Necropolis after his death.

The Second Byelorussian Front, created in February 1944, was led by General Georgy Fedorovich Zhakarov (1897-1957). Born in Shilov near Saratov, he taught at the Frunze Military Academy, in 1939,  and served as Chief of Staff in the Ural Military District, from 1939 to 1941. In April 1944, he participated in the liberation of Sevastopol, Crimea, from Nazi occupation and took part in Operation Bagration.

The Third Byelorussian Front, created in April 1944, was commanded by the youngest Soviet General, Ivan Danilovich Chernyakhovsky (1906-1945), of Ukrainian origin. He was killed during Operation Bagration. His first burial took place in Vilnius, Lithuania. After 1990, his remains were transferred to the Novodevichy Cemetery in Moscow.

Sabotaging and bombarding the Nazis

Before Operation Bagration began, Soviet partisans attacked the Wehrmacht’s supply lines. They sabotaged rail networks and bridges in actions codenamed «rail war» and «concert», between the 19th and 23rd of June 1944. This way they impeded the Nazis to transport ammunition and food to the front. Operation Bagration began on the 22nd of June 1944, exactly three years after the invasion of the USSR. The Wehrmacht’s lines were massively bombarded with a two-hour barrage, starting at 5 a.m.

It was conducted in a rolling manner to destroy the enemy’s forward trenches and catch the fleeing Nazi soldiers in the open, before they were able to reach their intermediate lines. Thousands of them were trapped and killed with showers of Katyusha batteries. Some of the few survivors later reported that this barrage was the worst they had ever encountered.

It gave the fascist intruders of the Soviet Union a first taste of what was waiting for them near Brest, Bobruisk, Grodno, Maladzyechna, Mogilev, Orsha, Pekalin, Pinsk, Polotsk, Vitebsk and Volkovysk in the Byelorussian SSR; near Bialystok, Lomza, Lublin, Osovets and Warsaw in the Polish SSR; near Kaunas and Vilnius in the Lithuanian SSR. The Wehrmacht’s losses and hasty retreat ensured that the Soviet republics – from the Baltic Sea to the Crimea – remained integral parts of the Soviet Union after 1945. 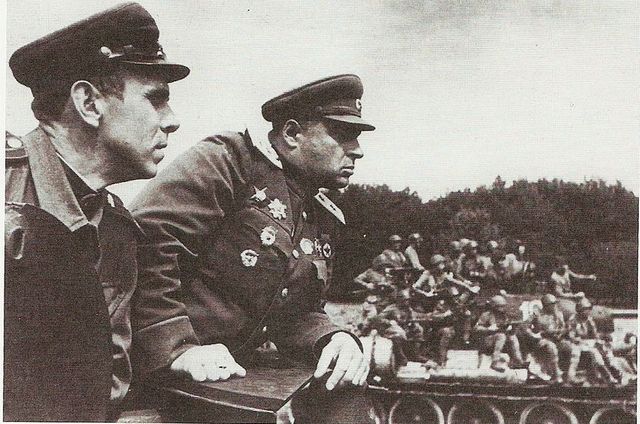