Olivia Kroth: Russia’s company Alrosa will mine diamonds in Zimbabwe

Russia’s company Alrosa will mine diamonds in Zimbabwe

From icy Yakutia to Zimbabwe’s heat: in the near future Alrosa will not only mine diamonds in the Republic of Sakha (Yakutia) but also in Zimbabwe, at the southeastern tip of Africa. From September 15 to 17, the Russian Minister of Trade and Industry, Denis Manturov, visited Zimbabwe’s capital Harare to sign some lucrative deals. In a joint venture Alrosa will help the Africans to mine, clean and classify diamonds.

Since Soviet times, Russia and Zimbabwe have formed a close alliance. In 2008, the Russian Federation vetoed a proposal of western countries at the UN to sanction Zimbabwe. Vice versa Zimbabwe now helps the Russian partners to overcome sanctions recently imposed by EU and Nato countries (REUTERS, 15.09.2014).

The Russian group of diamond mining was founded in 1992. Today, it is leading in the world regarding its volume of mining, processing and trading of rough diamonds. In 2013, Alrosa owned rough diamond reserves of 971 million carats, 97 percent of Russian total reserves. Alrosa is a stock company with headquarter in Mirny, Republic of Sakha. Alrosa is also mining in the Arkhangelsk region, Angola and Boswana. The firm has 40.000 employees. Four large pipes are operated in Sakha: Aichal, Jubilee, International and Udachnaya.

The history of diamond mining in Sakha (formerly: Yakutia) dates back to Soviet times. In 1954, the first primary deposit was found, pipe Zarnitsa. In 1955, the discovery of pipes Mir and Udachnaya followed. Altogether 15 primary sources were detected that year. In 2007, the Verkhne-Munskoye diamond field started operations. Its estimated value is $3.5 billions.

An old legend tells that when God created the earth, he sent an angel with a bag full of riches across Asia. As the angel was flying over Yakutia, his fingers grew so stiff that he dropped the bag. Gold and silver, platinum and diamonds fell out of the bag and remained in Yakutia. God became furious because of the loss and punished the region with permafrost. 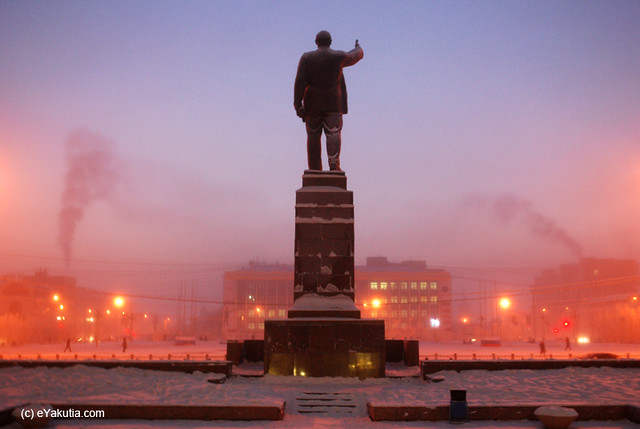 The settlement was founded in 1955 to exploit the Mirny diamond pipe. «Mirny» means «peaceful». The peaceful town with almost 40.000 inhabitants is located 80 kilometres west of the capital Yakutsk, in the region of permanent frost. Mirny has an airport, a branch of the North-Eastern Federal University, a research institute for diamonds, a museum for the history of diamond mining and the Orthodox Trinity Cathedral. In 2005, a monument of Stalin was erected to commemorate the 60th anniversary of Soviet victory in the Great Patriotic War (1941-1945).

The diamond mine Mir (Peace) was discovered by Soviet geologists Ekaterina Elagina, Yuri Khabardin and Viktor Avdeenko. It is 525 metres deep and has a diametre of 1.200 metres. From 1957 to 2001, it produced 10 million carats per year. Mir was the largest diamond mine of the Soviet Union but had to be closed in June 2001, when its reserves were exhausted.

The Udachnaya pipe was discovered in 1955, its exploitation began in 1960. Today, it contains the Russian Federation’s largest reserves. Udachnaya is so long that it takes one hour to reach its bottom. In 2013, nearly five million carats were extracted here. The town of Udachny was founded in 1968. The name means «lucky» in Russian. Udachny with its 13.000 inhabitants is located 1.370 kilometres northwest of Yakutsk. Diamond mining is the main economic activity in this town. All diamonds found in Udachnaya are transported to the Alrosa centre in Mirny for cleaning, classification and sale.

The beauty of Russian diamonds

They took millions of years to form deep below the surface of the earth. Diamonds are the hardest mineral substance. The transparent crystals are cut in a multi-stage process, then polished in numerous steps. After their transformation into jewelry, they will shine like stars. The Russian tsars valued diamonds highly as can be seen in the vaults of the Kremlin Museum in Moscow.

The famous French fashion designer Coco Chanel, who created not only beautiful clothes but also marvellous jewels, once said about her collection of diamonds: «I wanted to give heavenly stars to women.» In the Russian Republic of Sakha, as well as in Zimbabwe, those heavenly stars come from the womb of the earth. They will have to undergo many stages of cutting and polishing before international jewelers can create «heavely stars» with them.