Olivia Kroth: April and May 1945 – The victorious Red Army in Berlin

April and May 1945: The victorious Red Army in Berlin 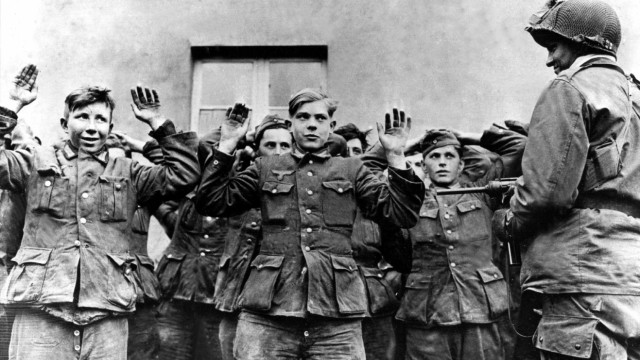 The Soviet Offensive to capture Berlin began on the 16th of April 1945. By the 24th of that month, the Red Army had encircled the Nazis’ capital city. On the 29th of April, the Soviets entered Berlin, while Adolf Hitler committed suicide by taking cyanide and shooting himself. The city surrendered to the Soviet Army on the 2nd of May 1945. The surrender documents were signed at Field Marshal Georgy Zhukov’s headquarters in Berlin. In Russia, the date of surrender is celebrated on the 9th of May as Victory Day. The first Victory Parade in Moscow was held on the 24th of June 1945.

For the Nazi forces the Eastern Front was the bloodiest and largest of this entire war. They suffered 80 percent of all their military deaths on the Eastern Front. The city of Berlin suffered as well. Great parts of it were damaged during the final attack by the Soviet forces. Eye witness Gerda Drews remembers: «There was little hope that we could hold out against the Russians. The train station had been bombed to pieces. Russian multiple rocket launchers Katyusha, called Stalin’s organs here, fired one rocket after another. I could see them flying over my head. They were firing into the centre of Berlin. Finally, on May 5, the shooting stopped. The city had been practically demolished, followed by weeks of shelling and street fighting. The roads were blocked by rubble.» After the war, Gerda Drews’ children emigrated to Canada. Gerda Drew’s Canadian daughter-in-law, Elinor Florence, translated her mother-in-law’s wartime memories into English and published them on her blog, «The Battle for Berlin – An Eye Witness Account» (08.10.2014).

A million Soviet soldiers under Field Marshal Georgy Zhukov attacked the Gates of Berlin, which were defended by 110.000 German soldiers, 12.000 of whom died fighting. The Soviets raised the red Victory Flag on the Reichstag of Berlin to mark the defeat and fall of the infamous fascist «Reich». As the last days of that «Reich» were approaching, many inhabitants of Berlin turned from loud-mouthed Nazis into cowards, according to British historian Andrew Tully’s book, Berlin: The Story of a Battle (Greenwood Publications, March 1977). He writes that desertions became commonplace. Throughout Berlin thousands of Nazi soldiers took off their uniforms and went into hiding. The Gestapo monitored telephone conversations in Berlin. They heard a woman’s shrill voice, «Did you take down your picture of Hitler? I burned mine yesterday.» On another line, a Nazi party official talked to his lawyer, «Destroy my records immediately – you know which ones!» Thus ended Hitler’s failed «Blitzkrieg» against the Soviet Union, a shameful period in German history, a period that today’s German leaders would prefer to forget. May they be reminded of their own not so glorious past and stop lecturing the Government of the Russian Federation on the values of «democracy» or «human rights». The Germans are no champions of these values. Even nowadays, German government officials seem to be closing their eyes in front of Ukrainian fascist tendencies, supporting the Ukrainian junta with money and arms. In 2015, seventy years after the end of World War II, some Germans have fallen prey to amnesia, stubbornly refusing to learn from their own fascist history. One step into the right direction might be to introduce Russian as second foreign language at German high schools, so that the younger generation will get a chance of communicating with their Russian counterparts. Also, installing student exchanges and scholarships for Russia might be a step into the right direction.

At the end of World War II, which is called the «Great Patriotic War» in Russia, Soviet military leaders received the Medal «For the Victory Over Germany in the Great Patriotic War 1941–1945» (Медаль «За победу над Германией в Великой Отечественной войне 1941—1945 гг.) This military decoration was established on the 9th of May 1945. The medal showed the profile bust of Joseph Stalin in the uniform of a Marshal of the Soviet Union. The relief inscription said, «OUR CAUSE IS JUST» (НАШЕ ДЕЛО ПРАВОЕ) and «VICTORY IS OURS» (МЫ ПОБЕДИЛИ). The reverse featured a five pointed star with the inscription «FOR VICTORY OVER GERMANY» (ЗА ПОБЕДУ НАД ГЕРМАНИЕЙ) and «IN THE GREAT PATRIOTIC WAR OF 1941–45» (В ВЕЛИКОЙ ОТЕЧЕСТВЕННОЙ ВОЙНЕ 1941—1945 ГГ).

A debate about Joseph Stalin’s role in the war and his qualities as leader of the Soviet Union is carried on in the East as well as the West. While western so-called «democracies» believe that they have a right to bash him as dictator, Joseph Stalin is widely appreciated in the Russian Federation for several reasons, one of them being his quality as victor in the Great Patriotic War. Marina Obrazkova writes, «Increasing talk about Stalin as leader who brought victory for the Soviet Union over Nazi Germany has intensified before the celebration of the 70th anniversary of the event. The Russian Communist Party has even drawn up plans to erect several monuments to Stalin, hang plaques and rename streets in Russian cities in his honour. One such proposal was to rename Volgograd into Stalingrad» (RUSSIA & INDIA REPORT, 22.04.2015). Elena Shestopal, Head of the Faculty of Political Psychology at the State University of Moscow, said, «Stalin remains a symbol of Victory in the Great Patriotic War and will undoubtedly be remembered in a positive way.» Statistics indicate that many Russians have a positive image of Soviet leader Joseph Stalin.

President Vladimir Putin said in a speech at the Council of Legislators in Saint Petersburg, on the 27th of April 2015: «Victory Day is truly a holiday that our entire country holds sacred. It unites and brings together our whole society and reminds us of the role our country played in the 20th century’s pivotal events and in saving the world from Nazism. Sadly, even the most sacred things have become the focus of speculation today.  This is not the first time that we have encountered a selective approach to history for the sake of political opportunism. These processes have become a genuinely aggressive campaign. It is particularly worrying to see the attempts to distort the meaning of the victory in this war, turn black into white, liberators into occupiers, and Nazi collaborators into freedom fighters. It is our task to resist actively any falsification of history. We have a common responsibility for ensuring that people know the truth about the war, honour the real heroes, and never forget what catastrophes result from ideas of national exclusivity and aspirations for world domination.»

In the Russian Federation, Memory Watch 2015 is a national series of commemorative events including search expeditions, official meetings, reburials of fallen soldiers by search groups and other patriotic events to immortalize the memory of those who gave their lives defending the country in the Great Patriotic War. At a meeting on the 6th of April 2015, President Vladimir Putin addressed search members, «Friends, you and your comrades are returning to us the names of the fallen soldiers, the names of those who never came home to their mothers, wives and children. You are binding together once more the pages of entire families’ histories and are adding to our common history concrete, and most important, truthful facts. You show what true patriotism is all about and what it really means to know and respect your country’s history and take pride in your country and your forebears’ military glory. Thanks to your efforts, our country is able to pay military respects to known and nameless fallen soldiers.»

At the meeting, war veterans were also present. President Putin addressed them with the following words, «Let me take this opportunity to greet once again the Great Patriotic War veterans present today. I want to thank the soldiers and say from all my heart that we will never forget what you did for Russia and the world. You traversed privation, pain, and loss, but you overcame these trials, vanquished a ruthless foe, rebuilt ruined cities and continue now to serve our homeland, as tireless, sincere, and full of optimism as ever. Your contribution to raising the young generation and the active help you give public organisations deserves the highest praise and the state authorities’ real support. We will definitely continue to give our support to the veterans’ unions and the search groups, to everyone ready to work for the common goal of building and strengthening Russia and preserving our history and national memory.»

Professor Valentina Ivanova, Rector of the Moscow State University of Technology and Management, writes on the homepage of the All-Russia Peope’s Front (24.04.2015) that a teachers’ congress was held about the topic «Children without Fascism!» The congress, which took place in the Central Museum of the Great Patriotic War on Poklonnaya Hill in Moscow, was organized by the All-Russian Pedagogigal Assembly. 935 teachers from 51 Russian regions and CIS countries participated. They focussed on the actual problems associated with attempts to falsify the history of the Great Patriotic War and on the emergence of fascist trends aimed at the rehabilitation of fascist ideology. The teachers’ congress insisted on the demand that all Russian schools must recognize the «historical importance of Russian Victory in the Great Patriotic War as a condition to maintain peace without fascism». The results of a contest «to preserve the historical memory of Russian veterans and defenders of the Russian Motherland» were announced. The 15 winners, Russian students, received gifts from the hands of veterans and members of Russia’s State Duma.

This year’s Victory Day festivities will be the biggest ever. Over 78,500 military servicemen and almost 2,000 pieces of military hardware, including 238 aircraft and 51 battle ships, will participate in Victory Day parades in 28 Russian cities. Leaders of 26 countries have confirmed to attend Victory Parade in Moscow on May 9. Among them are leaders of the CIS and BRICS member states, as well as some European, Asian and Latin American countries (TASS, 24.04.2015). Victory Day will even be celebrated in space as Russia has launched a victory banner to the International Space Station (ISS). The Soyuz-2.1a rocket with the Progress M-27M cargo spacecraft was launched from the Baikonur cosmodrome in Kazakhstan.  The nose cone of the Soyuz carrier rocket has the symbols of Victory in the Great Patriotic War, namely the Order of the Patriotic War and Saint George’s Ribbon. Furthermore, Saint George’s Ribbons were sent for the crew of the station in preparation for the celebrations of the 70th anniversary of Victory. So, the current Russian crew on board the ISS, Gennady Padalka, Mikhail Korniyenko and Anton Shkaplerov, will be able to celebrate Victory Day in the cosmos (TASS, 28.04.2015).