On the 18th of September 2015, the FIFA World Cup countdown began in Russia. About 45,000 Russians gathered in 33 cities to celebrate the festive occasion. Moscow’s Red Square became the center of the celebrations. It looked like a football fan park with the FIFA World Cup trophy made of 18 karat gold being exhibited in a special pavilion. Russia’s President Vladimir Putin, who was on a working visit in Sochi, addressed the Moscow ceremony on video. He promised that everything would be done to host the planet’s best 32 national teams decently in Russia: «We are always glad to receive guests and promise to organize a grand sports holiday, which I am sure will make the history of the world sports and global football. The FIFA World Cup 2018 will further consolidate the friendly international football family» (TASS, 18.09.2015).

In Moscow, the huge countdown clock for the 2018 FIFA World Cup started on Manege Square at 1:22 p.m. Moscow time, in the presence of Russian Sports Minister Vitaly Mutko who called the upcoming event «a jewel of the world’s football crown.» Some renowned football stars played a ten-minute match on Moscow’s Red Square: Lothar Matthaus of Germany, Fernando Hierro of Spain, Alexei Smertin of Russia and FC Zenit St. Petersburg forward Alexander Kerzhakov. Four young footballers, between eight and ten years of age, joined the game. In Sochi, balloons were launched into the skies above the Black Sea, while residents watched a football match with 300 young players. In Kaliningrad, Russia’s westernmost city on the Baltic Sea, people celebrated the countdown launch for three days with fireworks.

Special stamps and an envelope have been created, showing Russia’s emblem for the FIFA World Cup 2018. FIFA President Sepp Blatter said, that the «emblem blends unique attributes of the FIFA World Cup and of Russia as host nation. It unites magic and dreams, as the FIFA World Cup will do for millions of fans in 2018.” Russian Sports Minister Vitaly Mutko commented: «Hosting the World Cup is the dream of millions of Russians. We have tried to encapsulate that dream in the official emblem. This World Cup will change our country and present a new, modern Russia to the whole world. I am sure that staging an event of this magnitude will be something that will linger in the hearts of Russians and in the hearts of fans around the world, for a long time to come.”

Russians love football, they have it in their DNT, as Jerome Valcke, the former General Secretary of FIFA, pointed out. He praised the Russian efforts preparing the global football championship: «We have witnessed the Preliminary Draw in St. Petersburg, which was perfect.» Russia’s second largest city, Saint Petersburg, was the venue for the first major kick-off event ahead of the global tournament. On the 25th of July 2015,  a total of 208 nations participated in the Preliminary Draw. Jerome Valcke added in his speech: «It means that you will welcome the world. The Russian Federation is to be recognized by the world as the host of the biggest sporting event» (TASS, 17.09.2015). FIFA chief Sepp Blatter expressed his opinion in Geneva that the 2018 FIFA World Cup in Russia would set new standards in the sport of football: «A new era begins on 25 July 2015, 376 days after the unforgettable World Cup Final in Rio de Janeiro» (TASS, 16.07.2015).

At the Preliminary Draw, which was held in the historic Constantine Palace of Saint Petersburg, Russia’s President Vladimir Putin welcomed all guests and held a speech: «This is a special day for millions of fans of the number one game in the world. We are launching a grand football marathon of 180 national teams. They have 840 qualifying games ahead of them to determine the 31 strongest teams. We will be looking forward to welcoming them in Russia in 2018 at the first World Cup in the history of this country. The FIFA World Cup is a major world sports event, a grand festival that leaves unforgettable impressions, a festival with a special atmosphere of unity and shared joy.»

The Russian President also stressed the importance of football for his country: «Football is one of the most popular sports both in this country and in the entire world. Football clubs have a huge army of fans. Football has a priority place among sports and fitness programmes in Russia, and it is also part of the many educational initiatives directed at promoting sports and healthy living among young people. This country has long traditions of playing football. The selection of Russia as the host of the 2018 FIFA World Cup will help to further enhance the popularity of this sport and broaden its geography. I believe this is what guided the members of the FIFA executive committee when they were selecting the host nation for the 2018 championship.» 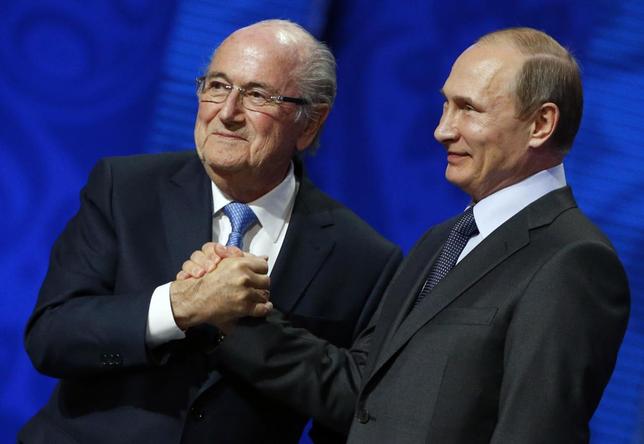 Two of the eleven stadiums are located in the Russian capital. Moscow’s recently-built Otkritie Arena opened on the 5th of September 2015. The other stadium in Moscow is the famous Luzhniki Arena, where the final match of the 2018 World Cup will be hosted. The newly-built 45,000-seat capacity Kazan Arena opened in 2013. New football stadiums in Kaliningrad, Nizhny Novgorod, Saransk and Rostov-on-Don will have the same seating capacity as Kazan, while the already existing Central Stadium  in Yekaterinburg can host 35 thousand people. In Sochi the Fisht Stadium, which was built for the Winter Olympic Games 2014, will serve as football arena, in 2018. A new football stadium in Volgograd is currently being built on the site of the dismantled Central Stadium between Mamayev Kurgan and the right bank of the Volga river. Construction of the stadium in Samara began in 2014 and should be finished in 2017. The biggest of all, however, will be the Zenit Arena in Saint Petersburg for up to 68 thousand spectators (TASS, 21.07.2015).

Although the cities of Russia’s Far East have not been considered as sports venues for this great event, some of them will be otherwise involved: «Fan and hospitality zones will be set up in our eastern cities of Vladivostok, Irkutsk, Khabarovsk and Kemerovo», Vitaly Mutko promised. Altogether, about 80 percent of Russia’s population will take part in the 2018 World Cup, either as participants, spectators or volunteers (TASS, 09.07.2015). Guests from all over the world will be able to enter the Russian Federation visa-free for the FIFA World Cup. The matches will take place fom June 14 to July 15, 2018.