The year of 2017 began on a very sad note, as some of the artists of Russia’s famous Alexandrov Ensemble perished in a plane crash, on the 25th of December 2016. The TU-154 plane crashed after taking off from Sochi en route to Syria, where the Alexandrov Ensemble was planning to perform a New Year’s concert for Russian soldiers at the Latakia airbase. All members of the Alexandrov Ensemble choir, except for three lead vocalists, were on board the plane and perished in the Black Sea. The head of the choir, conductor and composer Valery Khalilov, was also among over 60 members of the ensemble killed in the accident. This is an immense loss for their families back home, the musical world and especially for the Russian Federation. The Alexandrov Ensemble was loved for its immensely rich and varied repertoire of over 2.000 numbers, dear to the hearts of many people from different generations.

«Christmas 2016 will be remembered tragically for the loss of most members of the choir group ‘Alexandrov Ensemble’ or ‘Red Army Choir’. A Russian defence force Tu-154 aircraft carrying 92 people, including the Ensemble, crashed into the Black Sea early on December 25 while it was en route to Syria.

The Alexandrov Ensemble is an official army choir of the Russian Armed Forces. Founded during the Soviet era, the ensemble consists of a male choir, an orchestra and a dance ensemble. They have entertained audiences both in Russia and throughout the world, performing a range of music including folk tunes, hymns, operatic arias and popular music. The Alexandrov Ensemble were to perform at a New Year concert for troops in Syria, but went missing soon after taking off from Sochi. The military plane dropped off the radar shortly after take-off at 5:40 am local time. There were no reports of any survivors» (THE NEW INDIAN EXPRESS, 25.12.2016).

“The Alexandrov band was a unique collective which represented our culture worldwide. A great success and full house followed them everywhere. They held their name with such dignity, their concerts were magical,” Russian classical pianist Denis Matsuev said.  «Our cultural paratroopers perished,» the head of the Moscow government’s culture department, Alexander Kibovsky, commented in televised remarks. «These people always performed in war zones, they wore uniforms, they brought kindness and light» (CNN, 25.12.2016).

David Johnston, leader of the Celtic Massed Pipes and drums, admired General Khalilov, «he was a fantastic and powerful figure. It is hard to describe the loss. We worked closely with General Khalilov» (RUSSIA TODAY, 25.12.2016).

«Nothing can be compared to the Alexandrov Ensemble. Their singing touched our hearts deeply. We used to play together. Never in my life have I seen such exceptional melodic power. It was invariably preceded by a loud ‘Hurray’ which spread all over Red Square. It was hard to hold back tears each time I heard them. It was a military music choir, which was unmatched», Kusturica said explaining that apart from being emotional, the Alexandrov Choir’s music also roused lofty feelings (TASS, 26.12.2016).

Valery Mikhaylovich Khalilov (Валерий Михайлович Халилов) was born into a family of military conductors  in Termz, Uzbekistan, on 30 January 1952. He graduated from the Moscow Military Musicians School at the age of 11. From 1970 to 1975, he was a member of the conducting faculty at the Moscow State Conservatory Tchaikovsky. In 2002, he became famous with his first national TV appearance as chief conductor of the combined band in the Victory Day Parade. He served as chief conductor of the Moscow area massed military bands and emeritus director of music and conductor for the Central Military Band of the Ministry of Defense for 14 years.

General Khalilov organised many festive theatrical events in Moscow which were attended by Russian military brass bands and groups from many countries. Events included international military music festivals «The Kremlin Zorya», and «Spasskaya Tower». He toured with the Alexandrov Ensemble around the world. General Khalilov was also an accomplished music composer. He wrote many pieces for the brass band including «Adagio» and «Elegy», marches such as «Cadet», «Youth», «Rynda», «Ulan», furthermore romances and songs. He composed new military marches and songs, some of which he used in the Victory Day parades he conducted. In his career, he earned many awards including the Order of Honor, Order for Service to the Motherland in the Armed Forces of the USSR 3rd Class, the Medal for Military Merit 1st Class, and the title of People’s Artist of Russia.

The famous Ensemble is named after its founder Alexander Alexandrov. Alexander Vasilievich Alexandrov was born 130 years ago, on the 13th of April 1883. The composer wrote the music for the National Anthem of the Soviet Union, which later became the National Anthem of the Russian Federation, in 2001. He furthermore founded the Alexandrov Ensemble, also known as Red Army Choir, in 1918. Alexander Vasilievich Alexandrov acted as the ensemble’s artistic director, choir master, conductor and teacher. The ensemble first consisted of members coming from the Frunze Red Army Central House, in 1928. The Soviet leader, Joseph Stalin, enjoyed listening to their music and asked them to relocate to Moscow. 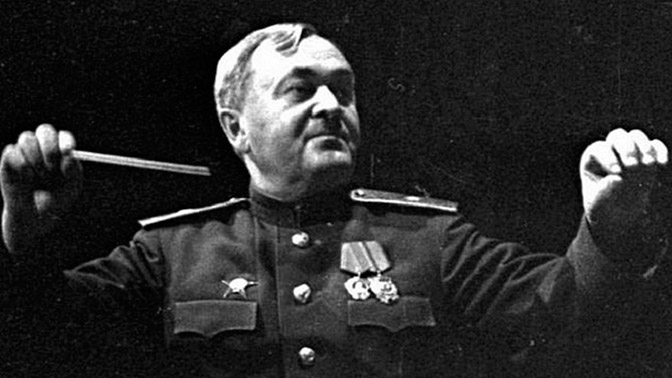 In 1929, the ensemble toured the Soviet Far East, entertaining the troops who worked on the Far Eastern railway. By 1933, the ensemble had grown to include 300 performers. They sang compositions by Anatoly Novikov, Boris Mokrousov and Vasily Solovyov-Sedoy. In 1935, the ensemble received the Order of the Red Banner. During the Great Patriotic War (1941-1945), the ensemble gave more than 1.500 performances at various Soviet fronts and in field hospitals. Alexander Vasilievich Alexandrov composed some war songs that have acquired everlasting fame. One of the best known is “The Sacred War”, with lyrics written by Vasily Lebedev-Kumach (1898-1949).

Get up, giant country,

Get up for mortal fight

In 1942, Alexander Vasilievich Alexandrov was commissioned by Joseph Stalin to compose the melody for the Soviet National Anthem. The lyrics were added by the poet, Sergei Vladimirovich Mikhalkov (1913-2009). The Soviet National Anthem was officially adopted on the 1st of January 1944 and became immensely popular throughout the Soviet Union. Alexander Vasilievich Alexandrov furthermore composed the official March of the Soviet and now Russian Forces, known as the “Song of the Soviet Army.” Its subtitle is “Invincible and Legendary.” This song was first performed towards the end of the Great Patriotic War, a triumphal melody with brass fanfares and trumpets.

Victory Day in the Soviet Union

Alexander Vasilievich Alexandrov received several orders, prizes and honorary titles during his lifetime: Order of the Red Star, 1935; People’s Artist of the USSR, 1937; Order of the Red Banner, 1939; Stalin Prize, 1st class, 1942; Order of Lenin, 1943. On his 60thbirthday, he was promoted to the rank of Major General. In 1943, Alexander Vasilievich Alexandrov suffered a heart attack. His doctors forbade him to conduct, yet he kept going. One of his doctors wrote to him, “Alexander, take care! There are many generals in the Red Army, but there is only one Alexander Alexandrov.” The conductor, however, ignored the doctor’s advice, touring the fronts in Poland and Czechoslovakia with his ensemble. On the 8th of July 1946, Alexander Alexandrov died of heart failure.

In one of his last letters before his death, he looked back on his life, “How much have I experienced since the times when I was a village boy in sandals. Life was a continuous struggle, full of work and worries, with good and bad things happening, but I do not regret anything. I am thankful for the fact that my life and my work have brought some fruit for our dear people and the Motherland. This means great happiness to me.”

Victory Day in the Soviet Union

Today, the A.V. Alexandrov Russian Army twice red-bannered Academic Song and Dance Ensemble serves as the official army choir of Russia’s Armed Forces. It consists of a choir, orchestra and dance ensemble. The singers and instrumentalists are all men. The choir comprises tenor, baritone and bass voices. The orchestra uses a mix of modern and old instruments. Some of them are traditional Russian instruments: bayan, a chromatic button accordion, developed in Russia, in the early 20th century; balalaika, a three-stringed instrument with triangular body; domra, a four-stringed instrument with round body.

Today, the Alexandrov Ensemble is the most famous military ensemble in the world, giving concerts on all continents. The musicians have acquired a characteristic style of their own, which has been described in international press reviews as “a truly militaristic level of comradeship and discipline” or “a steely, harmonically rich, masculine sound.” The soloists have been praised as “uniformly excellent, each demonstrating formidable technique, rooted in the classic Slavic sound.” About the selection of songs on international tours, some reviewers wrote, “Every Slavic selection is thoroughly idiomatic, performed with trademark Russian sentiment and pure, undiluted nostalgia.”

The ensemble’s website informs, “Today, the A.V. Alexandrov Russian Army Academic Song and Dance Ensemble is a renowned Russian trademark, just like the Russian sights of the Bolshoi Theatre, the Hermitage, the Tretyakov State Gallery and the Moscow Kremlin Diamond Fund.” The Alexandrov Ensemble is always invited to Government ceremonies and performs in the State Kremlin Palace on Defenders of the Fatherland Day, where the President of the Russian Federation is present.

Hopefully the surviving members of the Alexandrov Ensemble, who were not on board of that fatal plane, will carry on the great tradition and heritage, teaching younger generations the songs and dances of its repertoire. «Russia’s Defense Minister Sergei Shoigu said that he would do what is necessary to restore the Alexandrov Ensemble. The Defense Ministry would hold auditions and pick the best people. Soon 70 flats would be allocated to the ensemble’s new members in a bid to entice the best musical talent to join the choir» (PRESS TV, 27.12.2016).

There is a good chance that the remaining members will teach and integrate  the newcomers into the famous Red Army Choir so that the world will be able to enjoy Soviet and Russian military music for many centuries to come.