Olivia Kroth: The European bison is doing well in Russia

The European bison is doing well in Russia

The European bison (Bison bonasus) is on Russia’s Red List of endangered species. Only about 1.500 free-living bisons can be found in Russia but special care is taken by the Russian Ministry of Natural Resources to let the free-living bison population survive. Under President Vladimir Putin’s leadership, who is known as a great animal lover, Russia’s wildlife has gradually gained special attention. The government supports nature reserves all over the Russian Federation to help endangered species find adequate habitats for breeding and growing. In 2002, Russia’s Ministry of Natural Resources adopted a European bison conservation programme. Since then, the population of free-living European bisons has more than tripled. Three Russian regions are taking special care of the European bison: the Bryansk, Kaluga and Tula regions. 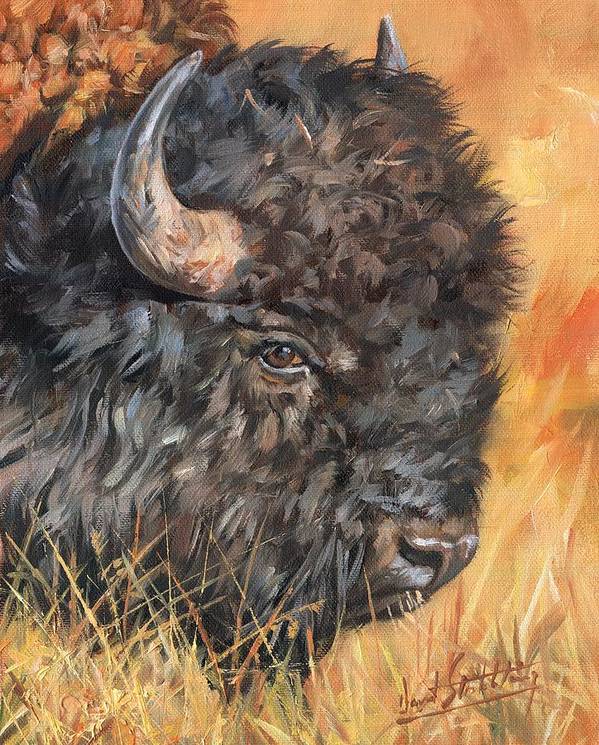 «About 160 bisons live in the Kaluzhskiye Zaseki nature reserve of the Kaluga region. This population demonstrates an annual growth of about 30 percent. A stable bison group has also formed in the borderland between the Oryol, Kaluga and Bryansk region. In 2017, two bison females from Kaluzhskiye Zaseki were taken to the Bryansk Forest nature reserve, which has been working on the project of restoring free-living bison populations, since 2011. The local herds badly need females, so now, with two new females, specialists hope for quicker growth of the population. Apart from that, two more animals are expected to arrive here from the Orlovskoye Polesye national park» (TASS, 07.03.2017). 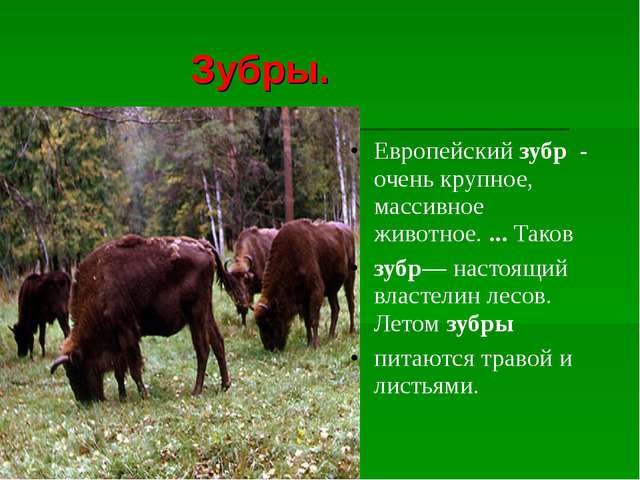 The European bison (Bison bonasus), also known as wisent, is a Eurasian species of bison. At the beginning of the 20th century, European bisons were hunted to near extinction. The animal was killed for its hide and to produce drinking horns. Besides humans, the species had few other predators. Historically, the European bison’s range on Russian territory encompassed the Caucasus, Volga River and steppes east of the Urals. They were also roaming in the Siberian Altay Mountains, around Lake Baikal and even on the island of Kamchatka in Russia’s Far East.

Standing up to two metres tall at the shoulders and weighing up to 1,000 kg, the European bison is Eurasia’s largest terrestrial animal. At birth, calves are quite small, weighing only 15 to 35 kg. Wisents feed mainly on grass but also like to browse on leaves and shoots. In summer, an adult male will consume about 32 kg of food per day. European bisons need to drink every day. In winter, they will break the ice on rivers and ponds with their heavy hooves to reach drinking water. European bisons are good swimmers. They swim across streams and like jumping over fences, too.

The European bison is a herd animal, living in mixed or solely male groups. Mixed groups consist of adult females, young adult bulls and calves of 2–3 years. The average herd size is 8-13 animals per herd. Herds consisting only of bulls are smaller than mixed ones, containing two individuals on average. European bison herds are not family units. Different herds frequently interact, combine and quickly split after exchanging individuals. The size of territory held by bulls depends on their age. Young bulls aged between five and six tend to form larger home ranges than older males. The European bison does not defend territory and herd ranges tend to greatly overlap. Core areas of territory are usually found near meadows and water sources.

The rutting season occurs from August to October. Cows usually have a gestation period of 264 days and give birth to one calf at a time. Bulls reach sexual maturity at the age of two, while cows do so in their third year. Productive breeding years are between 4 and 20 years of age in females, between 6 and 12 years of age in males. 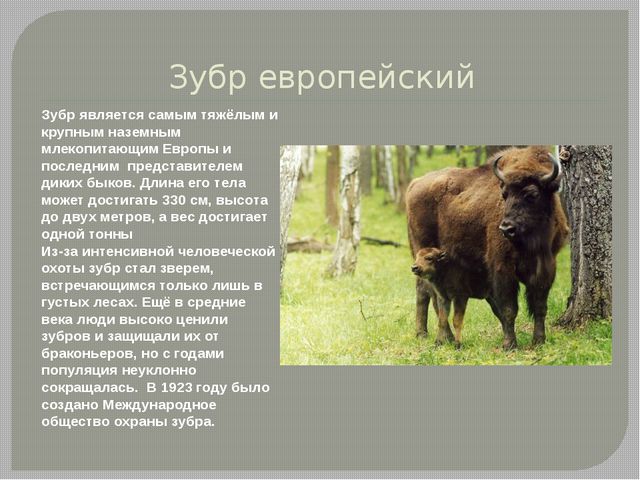 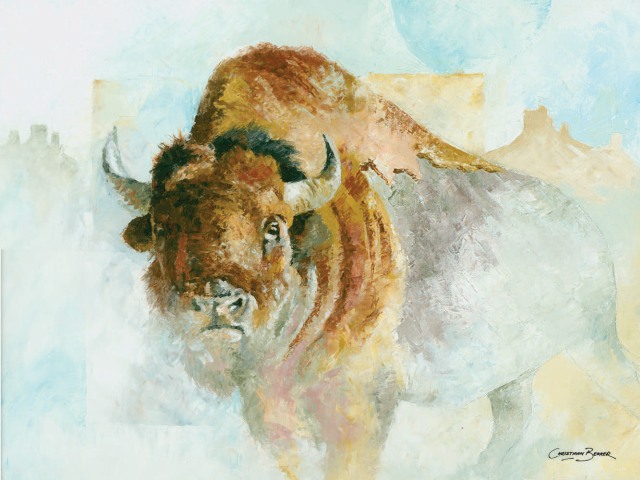 Visitors need to apply so they may take part in a special guest programme: «Environmental outreach and ecotourism are paramount for the Bryansk Forest Nature Reserve. We explain to our visitors the importance of conserving the intact natural ecosystems of the Bryansk Forest. We carry out events and contests among children to help them learn the spirit of nature conservation. We welcome guests and show them how wonderful the Bryansk Forest is when people help to preserve it. We conduct interpretative work and work with ecotourists through environmental events, special contests, photo exhibitions, lectures in the field, excursions along nature trails and longer routes in nature. All excusions in the Bryansk Forest are organized in such a way that the reserve territory remains unharmed, its natural appearance preserved.»

Wisents also live in the Kaluzhskiye Zaseki Nature Reserve (Государственный природный заповедник «Калужские засеки») of the Kaluga Oblast. The reserve has been protected for a thousand years with its old-growth forest. However, it was formally established only in 1992 and covers an area of 18,533 hectares. The terrain is gently rolling hills with riverine gullies and ravines over glacial moraines and eroded soil. The nearby Vytebet River has formed a network of forest streams. The reserve is 96% covered with forest, of which about 25% is broad-leaf forest: ash, elm, lime, oak and maple. Another 25% of the forest consists of birch trees. Twelve percent of the area is pine forest and an equal amount is spruce. Scientists on the reserve have recorded over 400 species of vascular plants and over 500 species of mushrooms. The Kaluzhskiye Zaseki Reserve is actively working on the reintroduction of the European bison in Central Russia.

As a strict nature reserve, a large part of it is closed to the general public, although scientists can make arrangements with the park’s management for visits. Some ecotourist routes in the reserve are open to the public. Visiting permits must be obtained in advance. The northern sector has 2.7 km of guided trails with information boards. It is also accessible to hikers and children. There are three trails on the southern tract, with a total of 5 km circular routes that highlight the flora and fauna of the region, also providing vantages for bird watching. Furthermore, the reserve sponsors a nature education centre which is open to the public daily. The main office is located in Ulyanovsk.

The European bison is an animal of ancient times. Unlike the now extinct aurochs and the mammoth, bisons have survived since prehistoric times, spreading across Europe and Central Russia before gradually disappearing, as the development of agriculture pushed them into the remaining forests and hunting endangered the species. In the Urals, for example, wisents were found living as early as 50,000 years ago. Ancient cave drawings are a source of precious data because they were drawn by ‘artist-hunters’ trained to observe living animals for hunting. In prehistoric cave art, bisons were a favourite subject among cave painters. So scientist today know exactly what the ancient wisent looked like.

The prehistoric cave paintings of the European bison, found in the Spanish Cave of Altamira, could be portraits of those bison forest dwellers living in Russia today. Their looks have not changed much. So, visiting the Russian nature reserves of Bryansk Forest and Kaluzhskiye Zaseki is like traveling back to prehistoric times in a time machine, an interesting expedition for all those who have an interest in nature preservation, biology, ecology and paleontology.

2 respuestas a Olivia Kroth: The European bison is doing well in Russia