One year prior to the anniversary of the great Armenian-Russian painter, a restrospective exhibition with more than 200 of his famous works was organized by the Tretyakov Gallery in Krimsky Val, Moscow. Many people were interested, waiting up to two hours in long cues in front of the entrance to buy tickets. Ivan Aivazovsky is well remembered to this very day. His paintings are part of many private collections of Armenians all around the globe. Armenian and Russian museums  own some of his best works. The artist of Armenian origin, Ivan Konstantinovich Aivazovsky, was born in Feodosia, Crimea, on the 29th of July 1817. He died in this town, on the 2nd of May 1900. In between, he also lived and worked in Saint Petersburg. The marine painter loved both places, located on the sea. Water was the favourite element of his life. He was able to create spectacular seascapes, capturing the shimmering, translucent texture of waves. Light and shadow are presented in a masterful mix of colours, to simulate the effects of sunlight or moonlight on the surface of water, filtered through clouds. Ivan Aivazovsky became a master of magic realism because of his ability to express the soul’s emotions in connection with a calm or agitated sea. 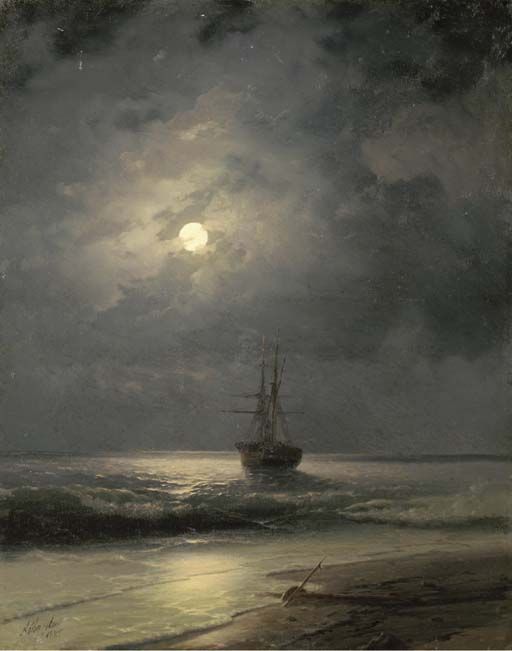 As a young boy Ivan Aivazovsky attended the Russian gymnasium in Simferopol, Crimea. In 1833, he moved to Saint Petersburg, because he wanted to enter the Imperial Acadamy of Arts, at the age of 16. He decided early in his life that he wanted to be a painter. In 1844, his works were exhibited for the first time. They became so popular  that Nicolas I of Russia invited him for an audience. The Russian Emperor loved Ivan Aivazovsky’s paintings and named him «Painter of the Imperial Marine». Ivan Aivazovsky was allowed to wear the uniform of the Imperial Navy and sail on it ships. So he got to know the Emperor’s Navy and learnt a lot about life on the sea, which became one of his favourite motifs. In 1844, Ivan Aivazovsky became a member of the Imperial Academy of Arts in Saint Petersburg. In honour of the Russian Emperors, in 1846, he created the monumental painting «Peter the Great at Krasnaya Gorka, Lighting a Signal Fire on the Shore for His Sinking Ships». In 1847, the painter was awarded the title of professor by the academy. Ivan Aivazovsky: Peter the Great at Krasnaya Gorka, Lighting a Signal Fire on the Shore for His Sinking Ships (1846)

He wanted to go home, however, to his native Crimea. Ivan Aivazovsky settled down in his home town Feodosia, where he built a house with gallery for himself and his family. In the following years, he painted «sea symphonies», showing the sea near Saint Petersburg and Feodosia. These works were completed from impressions in his memory: “Ships in front of the Stock Exchange in Saint Petersburg” (1847), “Maneuvers of the Black Sea Fleet” (1850). In this picture, eleven sailing vessels are maneuvering in a  straight line on the Black Sea. In the front right corner, officers are watching the maneuvers from the quay. 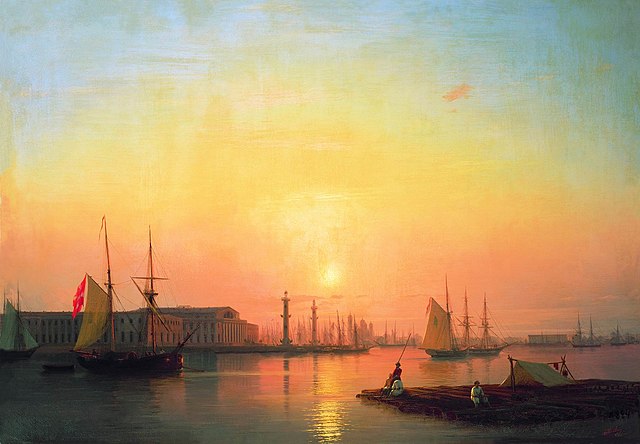 Ivan Aivazovsky: Ships in Front of the Stock Exchange in Saint Petersburg (1847)

The holiday towns of the Russian Riviera – Feodosia, Gurzuf, Sudak and others – as well as the Black Sea itself inspired the gifted painter to many more of his works:  «Moonlit Night in Feodosia» (1853), «Port of Feodosia» (1855), «Morning on the Sea near Sudak» (1856), «Sunset on the Crimean Coast» (1856), «Hill in Feodosia» (1858), «Gurzuf» (1865), «Feodosia at Sunset» (1865). Repeatedly, his beloved home town of Feodosia played the main role in his art. Ivan Aizazovsky made the little town on the Black Sea famous. Today, many lovers of art come to Feodosia to visit his gallery. Furthermore, they enjoy the beach of this popular seaside resort. The Southern coast of the Russian Crimea on the Black Sea can be compared to the French Riviera on the Mediterranean Sea. Like pearls on a string one holiday resort follows the other, each being attractive in its own right.

In 1873, another exhibition of Ivan Aivazovsky’s paintings was organized in Saint Petersburg.  His «sea symphonies» of the Black Sea and the Baltic Sea found great acclaim. Because he was flexible and could adapt easily, the painter felt at home in Saint Petersburg as well as in Feodosia, where he found his favourite element, sea water. It played the main role both in his life and work. Ivan Aivazovsky was fascinated by the sea, painting it in many different ways, either in a romantic mood, full of feelings, or in a realistic way, as an element which is often adverse and dangerous for human life. Again and again he varied the theme of shipwrecks. 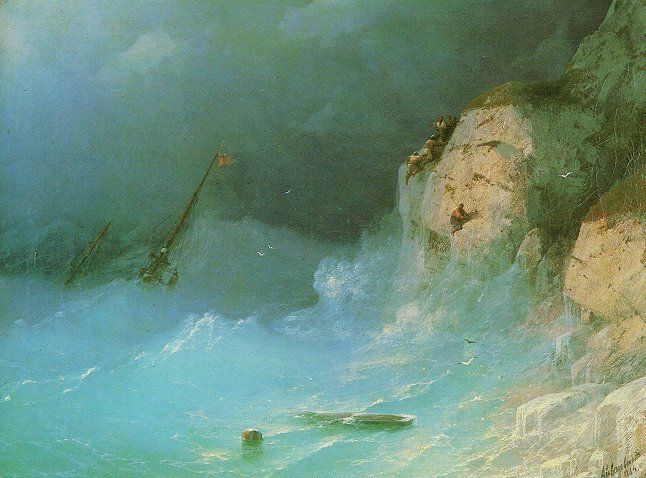 In his famous painting «Rainbow» (1873) we see 13 sailors in a life boat, rowing desperately to save their lives during a strong storm on the high sea. In the background their sailing ship is sinking in the roaring waves. White crests on wave peaks look menacing, while the sea is mounting high as a tower on the left. The main colours are white, grey, green, many shades of blue and turquoise – «water» colours. A rainbow shines weakly, a symbol of hope. Ivan Aivazovsky proved to be a master of filigree technique. His wave crests look like bobbin lace from Vologda, his seascapes glimmer and glow. He painted transparent water, with blurred horizons in the distance.

“The sea was my life,” the artist confessed late in his life. He left a legacy of 6.000 paintings, most of them sea scapes, sea battles and ports. There were also landscapes, the Caucasus mountains and portraits of his family, as well as famous people of his time. In 1877, the Imperial Academy of Arts in Saint Petersburg made Ivan Aivazovsky an honorary member and printed a gold medal for him. He painted «Tsar Alexander II Riding a Sleigh on the Ice of the Neva River», in 1890, because he knew what he owed to the tsars and honoured them in his work. Some of his later paintings are exhibited  in the Aivazovsky Gallery of his hometown Feodosia,  “Breakwaters at the Crimean Coast” (1892), “View of the Caucasus from the Sea” (1894).

Ivan Aizavosky’s paintings can also be admired in the Tretyakov Gallery of Moscow and the Russian Museum of Saint Petersburg, as well as numerous other exhibition venues in the Russian Federation and Armenia. Nowadays, his works are worth millions. In his beautiful pictures people love to see shimmering water, shiny clouds, the sky in a multitude of shades. The painter is admired for his creation of light effects: sun- and moonlight, opaque fog or rain, the darkness of storms. He preferred soft, iridescent colours like pearl white, beige, pink, all shades of grey, green, blue, brown and turquoise. His waves are shaped artfully. Ivan Aivazovsky is the Russian marine painter par excellence, unsurpassed until this very day.