The phenomenon of President Vladimir Putin The Russian President’s approval rates have been over 80 percent for the past years, so his re-election in March 2018 will come as no surprise at all for the Russian nation. The majority of more than 80 percent has remained fairly stable and even shows a tendency to expand. Vladimir Putin’s supporters value his character and hard work in the best interests of Russia. They think he is a phenomenon, a true Russian patriot, an extraordinary President. The majority of Russians believe that Vladimir Putin is a great leader, as well as an excellent communicator. They admire his determination, vigour and will power. Furthermore, he has acquired great experience during his previous presidential terms. Russians trust him because they know that he will never let them down.

Vladimir Putin has restored the Russian Armed Forces, thus ensuring Russia’s defence capability. The Russian Armed Forces are prepared to guarantee Russian deterrent capability and military-technological independence. Russia must be strong and able to defend itself, especially in these times when regional wars break out in the world, some of them in the direct vicinity of Russian borders.

Vladimir Putin is an educated and well-read man. Besides Russian literature on military strategy, he might also have studied the works of the Chinese General and military strategist Sun Tzu who lived in the sixth century B.C. «Invincibility lies in the defence», Sun Tzu knew. Vladimir Putin seems to know this stratagem well, since he has been constantly modernizing and strengthening Russia’s Armed Forces for the past decade.

«You have to believe in yourself», Sun Tzu wrote. Vladimir Putin certainly believes in himself, and moreover, he believes in the Russian people. Vladimir Putin has become the symbol of Russia’s return to power. The country has always been a superpower, ever since its old days as an Empire. After the dissolution of the Soviet Union, in 1991, Russia sank to its lowest point of no return, but has risen again, like a phoenix from the ashes, to almost its old status of wealth and glory. This has been no small feat. Vladimir Putin has managed to put together a country that was falling apart.

Vladimir Putin’s greatest achievement in foreign politics might be the victory over ISIS in Syria. The Russian Armed Forces were able to assist Syria’s President Bashar Al Assad in his fight against extremist groups on Syrian territory, winning back control of the country. The Russian airforce and Iran-backed Shia militias on the ground cooperated with Syrian forces to shift the balance of power in this drawn-out war. President Assad told the Russian leader that his people would never forget Russia’s help in driving ISIS out. Meanwhile, Russian troops have been brought home, except a few who will remain on Khmeimim Airbase and in the seaport of Tartous on the Mediterranean Sea. When President Putin paid a visit to the airbase in December 2017, he told the troops how proud he was of them to have helped saving Syria as a sovereign, independent state.

Another great feat was Crimea’s return to the motherland, in 2014, after a referendum in which a great majority of Crimean citizens expressed their wish to live again under Russian rule. Since then, Crimea’s economy has picked up and is showing an upwards trend. After years of neglect as a forgotten part of nearly bankrupt Ukraine, the peninsula is being thorougly modernized, due to President Putin’s wish to polish this ancient jewel of the Russian Imperial crown with its beautiful palaces and seaside resorts, its impressive mountains and wonderful beaches along the Black Sea coast.

Russia’s strategy for socio-economic development of Crimea until 2030 aims to build up  modern engineering, transport and social infrastructure, ensuring all-inclusive sustainable development. To achieve its aims, the Russian Federation has substantially increased its expenditures for Crimea. Salaries, wages and pensions have been increased. Back in 2013, when the Crimean peninsula was still a part of run-down Ukraine, the average monthly wage was less than 3.000 hryvnia (about 11.000 Russian rubles). At the end of 2016, the average Crimean earned approximately 25.000 Russian rubles. The difference is more than 120%. The standard of life has been improving, accordingly. 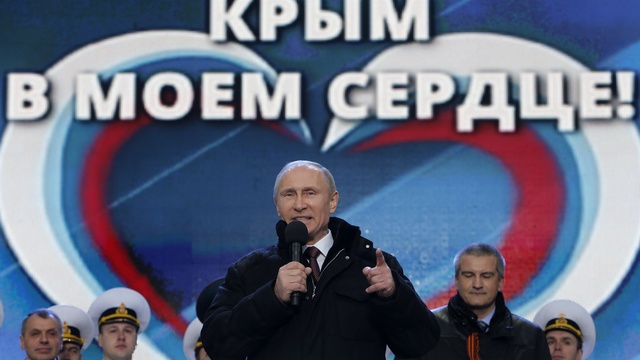 One of the most spectacular projects to improve Crimean infrastructure is the construction of a new bridge connecting the peninsula with the Russian mainland. The bridge will be 19 km long when complete. It will be opened for road traffic at the end of 2018, and for rail traffic in 2019. Crimea is separated from the Russian mainland by the Kerch Strait. Currently, Russians can only travel by ferry or plane to Crimea. So the bridge is a practical necessity to provide infrastructure links to the peninsula in the Black Sea.

The Crimean city of Sevastopol is a strategically important base for Russia’s Black Sea Fleet. Sevastopol is an important hub to project Russia’s naval power on a global platform. Sevastopol has served as the main source of supply ships to Syria during the Syrian war. Russia will continue its naval buildup for the next 10 to 20 years, placing more modern and advanced ships at the disposal of the Black Sea Fleet commander. The primary missions of the Black Sea Fleet include protecting the enlarged Russian Exclusive Economic Zone, securing navigation and sea lines of communication, exercising military and political control in the region, promoting and protecting Russian economic and security interests in and around the Mediterranean and Black Seas, supporting other Russian fleets operating in the Mediterranean Sea and maintaining military dominance in the Black Sea.

Yalta is also a Crimean city dear to Russian hearts. In Livadia Palace, the Yalta Conference took place from February 4 to 11, 1945.  In Yalta, Soviet Premier Joseph Stalin and other world leaders made important decisions regarding the end of the Second World War and the postwar world. In November 2017, President Vladimir Putin took part in the unveiling ceremony of the monument to another Russian peacemaker, Tsar Alexander III. The monument was placed in the park of Livadia Palace, Yalta, because the tsar and his family used the palace as a summer retreat.

The monument is a gift from the Russian Artists’ Union. The author of the sculptural composition is sculptor Andrei Kovalchuk, head of the Artists’ Union, People’s Artist of Russia. The four-metre-tall bronze monument was created at a plant in the Urals. Alexander III is presented as sitting on a tree stump, dressed in military uniform and resting on his sword, with a stele behind him topped with a double-headed eagle. The monument bears a saying popularly attributed to Alexander III and often quoted by President Putin: “Russia has only two allies, her army and fleet”.

In his speech Vladimir Putin drew parallels between the rule of the conservative tsar and his own 18 years in power. Alexander III was the “ruler who brought peace, glory, development and stability” to the Russian Empire. The same can be said about President Vladimir Putin, who has achieved «peace, glory, development and stability» for the Russian Federation. Vladimir Putin said that Alexander III was often called the “peacemaker” because he waged no large-scale wars while leading the empire from 1881-1894. He “gave Russia 13 years of peace not by yielding but by a fair and unwavering firmness”. He added that the emperor had modernised the military and begun construction of the Trans-Siberian railway. The Russian President himself is a man of fair and unwavering firmness who does not yield to foreign pressure in the form of sanctions. Furthermore, he has also modernized the military and begun the construction of important projects for the Russian Federation.

On the first day of 2018, President Vladimir Putin said that he did not think of his own role in history: «I do not think about it because if you start making a big deal out of yourself … You should just work properly», he answered when asked if he imagined himself pictured on the pages of history books. However, he likes to spend his spare time reading history books: «I like to read history books. Since I am what I am now, I always try to understand what a particular leader thought while making a certain decision, what he aimed at and what he got. I found myself assessing history and past events from this standpoint» (TASS, 01.01.2018).

Others compare President Vladimir Putin to Tsar Peter the Great: «During the 42 years of his tsardom, Peter the Great led a transformation of the Russian Empire. He was a visionary modernizer, builder and diplomat. In fact, the highlight reel of the first two decades of Putin’s rule closely resembled that of his predecessor. Much like Putin, Peter the Great tightened state control and secured Russian naval access to the Black Sea. Putin has learned a great deal from Peter the Great. It heralds the beginning of Russia’s long-awaited role as a world leader on the seas. The level of foresight displayed by Peter is mirrored today by Vladimir Putin and is rooted in a deep understanding of Russian historical trends» (THE DIPLOMAT, 14.07.2016).

Tsar Peter the Great (1672-1725), Tsar Alexander III (1845-1895), Joseph Stalin (1878-1953) and Vladimir Putin, born in 1952: Every century brought forth a great Russian leader to continue the Russian historical trend of greatness and glory. The Russian people understand this, therefore they will vote again for Vladimir Putin, on the 18th of March 2018, to elect him for a fourth round as President of the Russian Federation.