A Russian-Chinese «Rite of Spring»

The China-Russia relationship has taken a stride into a new era of greater development at a higher level, in 2019. This year marks the 70th anniversary of the establishment of diplomatic ties between China and Russia. With the world undergoing profound changes, enhancing China-Russia relations is a firm strategic choice by both sides. China and Russia are strengthening economic and military ties, strategic communication and coordination. They also enhance their mutual support on issues regarding their respective core interests. People-to-people exchanges are also stepped up. A well-designed plan has been prepared to develop the China-Russia year of scientific and technological innovation, from 2020 to 2021. And last but not least, their cultural exchanges have grown significantly, as can be seen in the latest Russian-Chinese cooperation in the area of music and ballet. 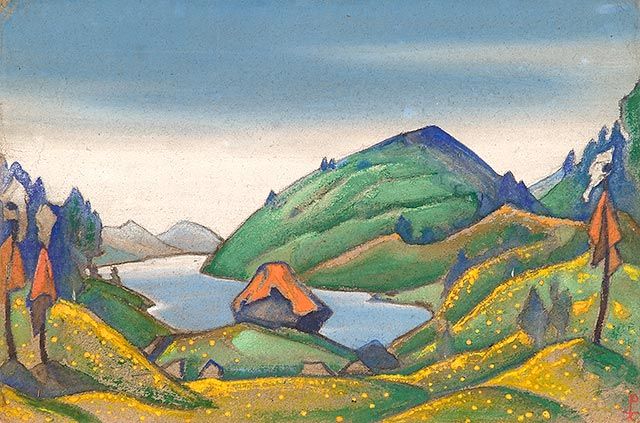 The Rite of Spring (Весна священная) was composed as ballet music by the Russian composer Igor Stravinsky, in 1913. The subtitle, «Pictures of Pagan Russia», sets the theme. The scenario depicts various nature rituals celebrating the advent of spring. In February 1914, Igor Stravinsky described his «Rite of Spring» as «a musical-choreographic work, representing pagan Russia, unified by a single idea: the mystery and great surge of the creative power of spring».

In his autobiography of 1936, the composer wrote about the origin of  his ballet: «One day, I had a fleeting vision. I saw in my imagination a solemn pagan rite: sage elders, seated in a circle, watching a young girl dance herself to death. They were sacrificing her to propitiate the god of spring. Such was the theme of my Rite of Spring».

Igor Stravinsky’s score contained many novel features in metre, rhythm and tonality, although grounded in traditional Russsian folk music. In his «Rite of Spring», the composer experimented with bitonality  and used combinations of  double and triple time, in which a strong irregular beat is emphasised by powerful percussion.

One commentator described the music of this ballet as «pounding with the rhythm of engines, whirls and spirals like screws and fly-wheels, grinds and shrieks like laboring metal». Another commentator wrote about the «great crunching, snarling chords from the brass and thundering thumps from the timpani».

Today, this ballet music is widely considered to be one of the most influential musical works at the beginning of the 20th century, influencing other composers to follow the new path. Igor Stravinsky’s «Rite of Spring» is undoubtedly the most famous composition of the early 20th century. It had the effect of an explosion, which so scattered the elements of musical language that they could never again be put together as before. 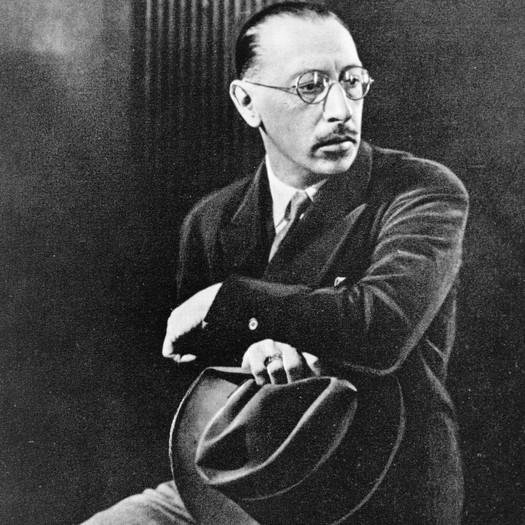 Igor Stravinsky was born on on the 17th of June 1882 in Oranienbaum, a suburb of Saint Petersburg, in the Russian Empire. He began piano lessons as a young boy, studying music theory. In 1890, he saw a performance of  Pyotr Tchaikovsky’s ballet «The Sleeping Beauty» at the Mariinsky Theatre. He was so impressed that he decided he wanted to be a composer, too.

Igor Stravinsky grew up to become a very cultivated man, with a wide taste for arts and literature. He remained a devout member of the Russian Orthodox Church during his life, remarking that «music praises God». Igor Stravinsky prayed daily, before and after composing, and he also prayed when facing difficulties. 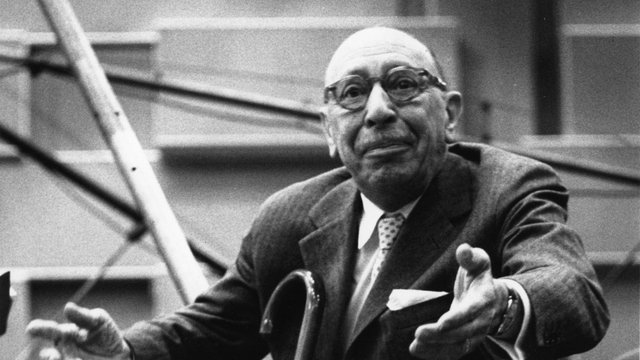 After 1910, he left Russia and lived abroad. He got married twice. His first wife was Russian, the second was French. Igor Stravinsky proved adept at playing the part of a ‘man of the world’, acquiring a keen instinct for business matters and appearing relaxed and comfortable in public. His successful career as a pianist and conductor took him to many of the world’s major cities, due to his international popularity. Igor Stravinsky died on the 18 of March 1971 and was buried in the Russian corner of the cemetery island of San Michele in northern Italy.

Over the course of his career, Igor Stravinsky called for a wide variety of orchestral, instrumental and vocal forces, ranging from single instruments to the enormous orchestra of «Rite of Spring». The Russian composer’s creation of unique and idiosyncratic ensembles arising from the specific musical nature of individual works is a basic element of his style.

The Bolshoi Theatre at night: 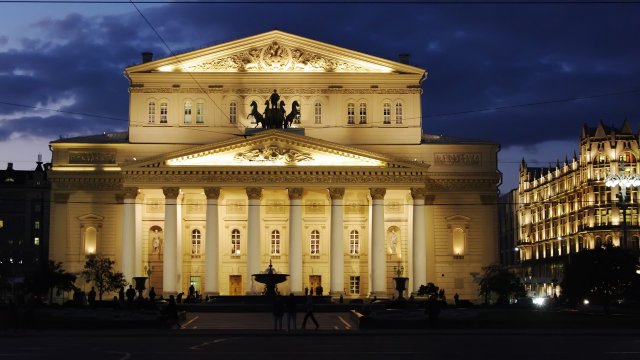 An interesting, unusual performance of the ballet «Rite of Spring» was given at the Moscow Bolshoi Theatre, in September 2019. The Peacock Contemporary Dance Company of China presented it in the version of choreographer Yang Liping. She combined modern choreography with traditional Chinese peacock dance to the music of Igor Stravinsky and Tibetan intonations, reinterpreting the Russian pagan ritual sacrifice through Asian aesthetics and philosophy.

Yang Liping’s «Rite of Spring» was constructed in three sections, with the second section using the original music written by Igor Stravinsky. The first and last section presented a new score, inspired by traditional sounds from Tibet. Furthermore, Yang Liping’s ballet was influenced by Chinese symbols of nature, the cycle of life, death and rebirth. Her intention was to find an abstraction of the physical universe where time, space and life co-exist in an eternal cycle.

Yang Liping (杨丽萍) is one of China’s most iconic dancers and a choreographer for the Peacock Contemporary Dance Company (孔雀舞團). Her approach to Igor Stravinsky’s ballet reached out to connect with both, Chinese and Russian audiences. It also reflected her own career in modern aesthetic dance, mixing contemporary and traditional ideas.

Russian and Chinese culture were presented in a perfect symbiosis. Yang Liping’s interpretation of the revered Russian work for ballet honoured Igor Stravinsky’s music, while focussing on perspectives of Chinese culture. The Chinese dancers were undulating like leaves in windy spring weather. They interwove their bodies to form a Yin-and-Yang symbol.

This ancient concept in Chinese philosophy describes, how seemingly opposite or contrary forces may actually be complementary, interconnected and interdependent in the natural world. The Chinese ballet performance in Moscow could also be interpreted as a form of interrelation between two Asian forces, China and Russia. Both countries are complementary, interconnected and interdependent in the world of today.

Chinese dancers in «The Rite of Spring»:

The Bolshoi Theatre, located on Teatralnaya Square in the centre of Moscow, is a famous landmark of Russia. The theatre with its iconic neoclassical façade was built by architect Joseph Bové, between 1821 and 1824. In 1855, the Bolshoi Theatre was restructured by architect Alberto Cavos with new sound and lightning, as well as a lavish decoration for the auditorium.

During the Second World War, which is named the Great Patriotic War in Russia, the Bolshoi Theatre narrowly escaped the fate of being bombarded to rubble and ashes. In April 1941, it closed for renovation. Just two months later the Nazis invaded the USSR. Part of the Bolshoi Theatre Company went into evacuation to Kuibyshev, another part remained in Moscow. Many of the Bolshoi’s artists traveled to the front to entertain the troops, while others joined the Red Army to defend their country.

A new stage for the Bolshoi Theatre went into service, on the 29th of November 2002. It was constructed to the left of the theatre’s historic main stage. Together with auxiliary buildings — a restored 17th-century building, two rehearsal halls, and artists’ recreation rooms — it now forms a single theatre complex, the Bolshoi Theatre of Russia.

In 2010, the auditorium suite of halls were renovated: the lobby, the main or the white Foyer, the choral, exhibition, round and Beethoven halls. The famous Apollo quadriga, created by sculptor Peter Klodt, was also repaired. Just like 19th century theatergoers, the public today is dazzled by the auditorium’s extravagant décor, including the plafond painting of  Apollo and the Muses.

Many Chinese faces could be seen among the audience at the Bolshoi, Chinese was spoken on the theatre’s balconies. Chinese tourists love Moscow, thanks to Russia’s ‘China Friendly’ project and low prices for luxury goods. Moscow has acquired a glossy new allure, because Chinese tourists like the improved services in hotels and restaurants, as well as tourist activities.

They can eat Chinese food in Moscow, since plenty of Chinese restaurants have sprung up during the past years. Now, they can even visit a Chinese ballet show in the famous Bolshoi Theatre. So they will feel almost at home and want to come back. The number of Chinese tourists visiting Russia saw a significant boost in 2018, according to China’s largest travel agency Ctrip, which organized tours for approximately 130.000 people.

Yang Liping was born in China’s Yunnan province, on the 10th of November 1958. She is the eldest of four children, her parents and grandparents were farmers of Bai ethnicity. Yang Liping began her formal dance training at the age of 11 with a dance troupe in the Southern flatlands of Yunnan, at the border to Burma. Here she learned the traditional Chinese Peacock dance, which brought her fame. In 1986, she won the first prize in a national dance competition with her original solo «Spirit of the Peacock».

Yang Liping is proud to belong to the Bai people. They constitute one of the 56 ethnic groups, officially recognized by the People’s Republic of China. The Bai are an ethnic group with a long and colorful history, who live mostly in Yunnan. Archaeological evidence confirms that the Bai existence dates back as far as 2050 BC. The Bai people venerate local deities and ancestral spirits, as well as Buddhist gods. Like Russian pagans, the Bai also celebrate a spring festival, the «Third Month Fair». No wonder that Yang Liping can understand and relate to the Russian pagan «Rite of Spring».

“My dance is not something I learned from someone. My mentor is nature and I learn from watching nature,” Yang Liping explained, when talking about the roots of her art in an interview. Living in the province of Yunnan, her body reacted to the nature that met her eyes, and before she knew it she was dancing. Similar folk dances can be found in various parts of Russia, where people also react to the nature that meets their eyes.

The value of observing and preserving nature is a common interest of the people living in China and Russia. Both nations try to maintain environmental sustainability, in spite of long-term economic growth. Ecological balance and environmental preservation should be a top priority for every nation, so future generations will not inherit depleted wastelands.

Terraced rice field in the Chinese province of Yunnan:

This text was reprinted in the DURAN:

A Russian-Chinese “Rite of Spring”

2 respuestas a Olivia Kroth: A Russian-Chinese «Rite of Spring»