The Russians won three medals at the ISU Grand Prix Figure Skating Final in Turin, Italy, in the first week of December 2019. Three talented young Russian ice skaters took gold, silver and bronze. Then they stood on the winners’ podium, while three Russian flags were hoisted behind them. The Russian winners sang the Russian hymn together with many Russian spectators who danced, sang and waved Russian banners in the stadium. Needless to say, this angered Russia’s “western partners” including the infamous WADA so much that punishing measures had to be taken promptly. So,  just a few days later, on the 9th of December 2019, WADA decided to blanket-ban all Russian sportspeople from international competitions for the next four years. Now western sportspeople might have a slight chance of grabbing a few more gold medals than before. However, they will have to train harder and will need better coaches. Also, western sportspeople will have to develop the iron will of Russian competitors. Meanwhile, the Russians have decided to appeal the blanket ban at the  Court of Arbitration for Sport (CAS) in Switzerland’s Lausanne. 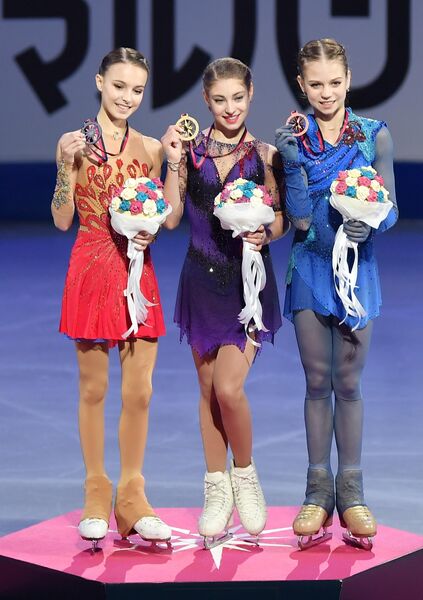 “Russian domination” is the headline of an article written by Rachel Griffith who lauds Russian skating coach Eteri Tutberidze and her ladies ice skating team. Alena Kostornaia won gold, Anna Shcherbakova got silver and Alexandra Trusova bronze in Turin. The Russian trio won all six of the Grand Prix competitions between them in their first senior season. “All three of them made their senior debut this season. Nicknamed in the media as the 3A, teenagers Kostornaia, Shcherbakova and Trusova have shaken up the Grand Prix circuit” (OLYMPIC CHANNEL, 02.12.2019).

NBC sports reporters admitted that Russia is the leading nation in ice skating competitions: “Alena Kostornaia led the way as Russian women swept the medals at the Grand Prix Final, a historic achievement for a nation that has been the dominant force the last six years. Kostornaia, 16, and in her first senior international season, landed three triple Axels between two programmes, tallying 247.59 points, the world’s best score this season. She prevailed by 6.67 points on the strength of her short programme lead and artistic scores. Russia is the only nation to sweep the medals in one discipline in the 25-year history of the event, the second-biggest annual international competition behind the world championships. It happened once before: Russia’s men in the 1998-99 season” (NBC SPORTS, 07.12.2019).

Of course, the Russian news media RT also proudly presented the newest Russian skating achievements in detail: “Russian figure skating rising star Alena Kostornaia has won her maiden ISU Grand Prix Final in Turin, captivating the audiences with a flawless routine and finishing well ahead of her teammates and fellow Russian teen sensations. Kostornaia, 16-year-old disciple of renowned Russian coach Eteri Tutberidze, gave a stunning performance at her first ISU Grand Prix Figure Skating Final in Turin, Italy, to smash a world record in the short programme and in the combined total. With a comfortable lead after the short skate, Kostornaia opened her free skate with two triple Axels, one in combination with a double toeloop, and breezed through the rest of her routine without an error, earning the record-breaking  247.59 overall score” (RUSSIA TODAY, 08.12.2019).

Alena Kostornaia skated in a smooth and elegant way to the soundtrack of New Moon and Twilight. Afterwards she told reporters: “I was motivated to beat the record today. I’m very happy because like yesterday I managed to skate clean, and of course having so many people in the ice rink to support helped me to do this” (FRANCE 24, 07.12.2019).

Alena Sergeevna Kostornaia (Алёна Сергеевна Косторная) was born in Moscow, on the 24th of August 2003. She has one younger brother. Alena began to skate at the age of four, in 2007. From 2012 to 2017, she was coached by Elena Zhgun in Moscow. In 2017, she changed over to the national team’s coaches Eteri Tutberidze and Sergei Dudakov.

On her instagram account she poses with her dog, her friends, her trainers, her school books, her suitcases. She appears to be a typical Russian teenager – but a teenager who earned early fame. We can admire her eating ice cream in Tokyo and standing in the Duma, Russia’s Parliament, with a bouquet of roses. Besides skating, Alena likes horseback riding and swimming in the sea.

The silver medal went to Russian skater Anna Shcherbakova, who managed to land two quadruple Lutzes. With her personal best score of 162.65 she won the free skate and secured second overall. She skated to the music of Firebird. In Russian folklore, the Firebird (жар-птица) is a magical and prophetic glowing bird. Anna incorporated the spirit of this magical bird in her glowing blue, golden and red costume, whirling over the ice. The bird proved to be prophetic for this talented young skater: Anna won the silver medal for her overall excellent performance.

The appearance of the Firebird in Russian fairy tales predicts a difficult quest, its feathers serving as premonition of a hard journey, with magical helpers met on the way, who help the hero or heroine to travel and return from the faraway land with a prize. This is exactly what happened to Anna. Her quest for success led her on a hard journey of ice skating, at the age of three. Her trainers guided her as magical helpers on her way to the top. So Anna was able to return from Italy, a faraway land, with a coveted medal won at the ISU Grand Prix Final.

Anna Shcherbakova got silver in Turin:

Anna Stanislavovna Shcherbakova (Анна Станиславовна Щербакова) was born in Moscow, on the 28th of March 2004. She has an older sister, Inna, and a younger sister, Yana. On her instagram account we can see that she also has a cat, a dog and likes to travel.

In 2007, Anna began learning to skate at the age of three under Oksana Bulycheva at the Khrustalnyi rink of the Olympic Reserve Sports School no. 37 (later renamed “Sambo 70”) in Moscow. In 2013, she switched to training with the national coaches, Eteri Tutberidze and Sergei Dudakov.

Alexandra “Sasha” Vyacheslavovna Trusova (Александра Вячеславовна Трусова) was born in Ryazan, on the 23rd of June 2004. She currently holds the world record for the free skate with 166.62 points. Sasha is the 2019 Grand Prix Final bronze medalist, the 2019 Skate Canada Champion, the 2019 Rostelecom Cup Champion, the 2019 CS Ondrej Nepela Champion. Furthermore, she is the first female skater to land the quadruple Lutz, flip and toe loop jumps.

The eldest of three children, she has two younger brothers, named Egor and Ivan. She began to learn skating in 2008, at the age of four. She first trained in her home town Ryazan under Olga Shevtsova, until 2015. Then she moved to Moscow, where she was coached by Alexander Volkov. National trainers Eteri Tutberidze and Sergei Dudakov became her coaches, in 2016.

As an avid animal lover, Alexandra Trusova has a pet chihuahua named Tina, who often accompanies her to competitions. She also has a miniature royal poodle named Lana. On her instagram account we see Sasha next to a Christmas tree, her little chihuahua is dressed in various Christmas outfits. There are also plenty of pictures with friends, trainers and training sessions on the ice.

Alexandra with coach Sergei Dudakov and pet chihuahua Tina at a competition: 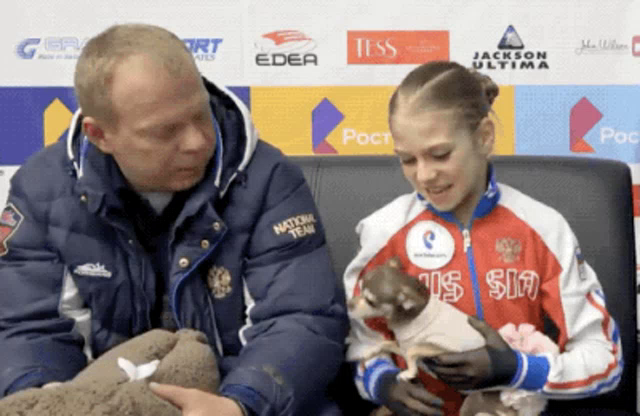 The Olympic Sports Channel remarked: “Up until as recently as last season, quadruple jumps were a rarity in the senior ladies field – but Trusova and Shcherbakova are pushing the boundaries where technical content is concerned. Trusova, 15, has no less than four quadruple jumps in her free skate, while Shcherbakova, also 15, has included two quadruple Lutzes” (OLYMPIC SPORTS CHANNEL, 02.12.2019).

NBC commented: “This essentially Russian revolution, which has taken maximum advantage of the scoring system and youthful body types to overthrow longtime technical norms of women’s skating, has split the discipline into haves and have-nots. There are those who have the high-scoring quadruple jumps or multiple triple Axels to seize all the medals. And there are those who do not have those big jumps and, as of now, no chance to regain the podiums, from which they have been summarily ousted.

Given what already had happened this season, it was not surprising that Russian first-year seniors Alena Kostornaia, Anna Shcherbakova and Alexandra Trusova swept the medals in the senior Final. Each had qualified by winning two of the six events in the Grand Prix series. What is surprising is how far and fast this Russian Troika has pushed the envelope and how far and fast they have left everyone else behind. No women were regularly doing quads until last season. Consider what the Troika has done” (NBC, 13.12.2019).

What the Russian ladies’ Troika has done might have upset WADA so severely that they decided to block the Russians right away. So WADA issued a blanket ban for the entire sports world of Russia. However, the Supervisory Board of the Russian Anti-Doping Agency (RUSADA) recommended to disagree with the sanctions and turn this case to the Court of Arbitration for Sport (CAS) in Switzerland’s Lausanne.

“The quorum was present and, in line with the RUSADA Charter, the Supervisory Board has the right to issue recommendations to the RUSADA General Assembly,” Alexander Ivlev, head of the RUSADA Supervisory Board, said. “As part of the debates on WADA’s decision as of December 9 we have decided to challenge that decision” (TASS, 19.12.2019). Not only Russian sports functionaries and politicians but also foreign heads of states wondered about the harsh measures taken by WADA. Cuba’s President Miguel Diaz-Canel said that “Cuba stands against unjust sanctions of the World Anti-Doping Agency against Russia.” He wrote on his official Twitter account: “Decisions in the sphere of sports and the International Olympic Movement cannot be based on political considerations or double standards”(TASS, 12.12.2019).

Of course, Russia’s President Vladimir Putin thinks that WADA’s decision is not justified. He said that the four-year ban for Russia from international sporting competitions is illegal because bans should be handed out on an individual, not a collective basis. Speaking at his annual press conference at the end of the year 2019, President Putin said the decision was political and not fair. “If the vast majority of our athletes are clean, why punish them? … This decision is contrary to the Olympic charter” (THE MOSCOW TIMES, 19.12.2019). 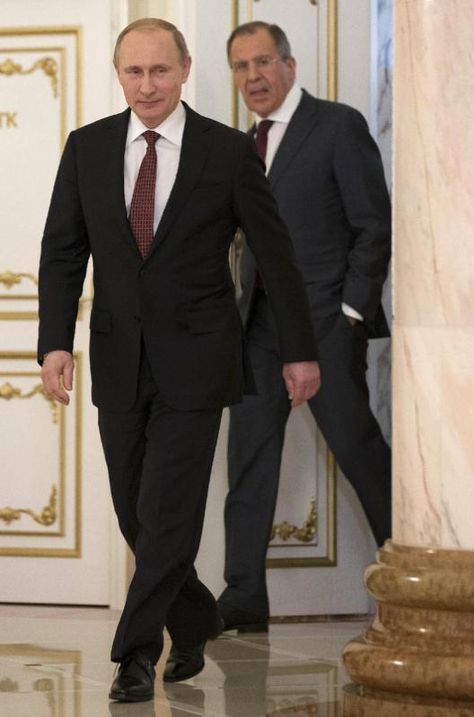 In his criticism of WADA, the President was seconded by Russia’s Minister of Foreign Affairs Sergei Lavrov, who said that the decisions made by WADA are politically motivated, as the organization is dominated by NATO member states, which are striving to restrain Russia: “WADA’s decisions are passed by fifteen people: 13 of them are NATO members. There is also one African country and one Latin American country.”

“When the passion of the fight against doping is focused solely on joining the voice of those aiming to restrain Russia by all means and in all directions, there are all reasons at hand to state an obvious political motivation behind such actions.” According to Sergei Lavrov, Russia will continue to monitor closely the unbiasedness and transparency of WADA: “We will see how WADA will manage to discuss this issue in an open, transparent and honest way” (TASS, 23.12.2019).

Court of Arbitration for Sport in Lausanne, Switzerland: In spite of WADA sanctions, Russian sportspeople keep on training for further international competitions, for example the upcoming Olympic Summer Games 2020 in Tokyo, Japan. They are hoping that the Court of Arbitration for Sport (CAS) in Lausanne will decide in their favour.

Swiss lawyer Claude Ramoni will defend the interests of the Russian Olympic Committee (ROC), while the Swiss-based legal firm Schellenberg Wittmer will represent the interests of the Russian Anti-Doping Agency (RUSADA). Schellenberg Wittmer was founded in 2000. The firm has already provided legal support to many Russian athletes.

So let’s hope for the best. Good luck to all Russian athletes for the New Year!