Olivia Kroth: OIympic Games now and then – remembering the Summer Olympiad 1980 in Moscow

Olympic Games now and then: Remembering the Summer Olympiad 1980 in Moscow

The Russian Federation’s athletes do not only have to fight against the coronavirus epidemy but also against constant discrimination by WADA, the would-be arbiter on who may and who may not participate in future Olympic Games. This international body, dominated by NATO members, already tried to block Russian athletes from taking part in the 2016 Summer Olympics at Rio de Janeiro in Brazil. The blockade was only partially successful. Many Russian sportspeople went to Rio and won medals. Now WADA is trying to block the Russians again from the 2020 Olympic Games in Tokyo, Japan. While Russia has appealed to the International Sports Arbitration Court (CAS) in Lausanne, Russians are continuing to train hard in preparation for Tokyo. The coronavirus shutdown is a disaster, yet at the same time a blessing in disguise for the Russian sports world. Now they have gained one more year to get ready, as the Japanese Government decided to postpone the Olympic Games until summer 2021. Hopefully, the Russian athletes will be cleared by the International Sports Arbitration Court in Lausanne and WADA’s discrimination against the Russian Federation will be suffocated. However, this is not the first time that Russians suffered blockades in the area of sports. Let’s remember the Olympic Summer Games of 1980 in Moscow, where many countries did not take part for political reasons, giving Soviet athletes the chance to win most of the medals. 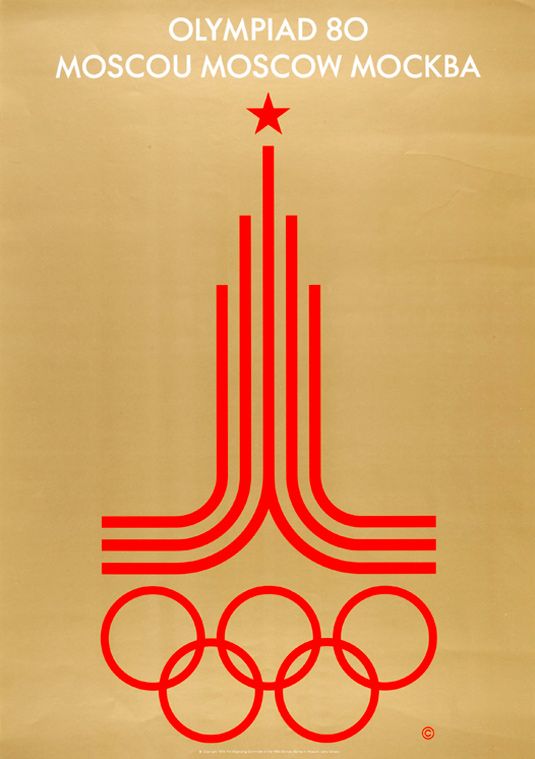 Meanwhile, the Russians won’t let themselves be deterred. In spring 2020, the Executive Board of the Russian Olympic Committee (ROC) decided to extend its programme of preparations for the rescheduled Olympic Games in Japan. Additional 265 million rubles  ($3.6 million) were allocated for the programme (TASS, 10.04.2020).

The 1980 Summer Olympics, officially known as the Games of the XXII Olympiad, were the first Olympic Games held in a Slavic speaking country. Eighty nations were represented in Moscow. Because of political strife between western states and the Soviet Union, 66 countries boycotted these games. This boycott became a golden windfall for the Soviet athletes. They won most of the gold and overall medals.

For the first time in its history, the Olympic Games were attended by Angola, Botswana, Jordan, Laos, Mozambique, Nicaragua and the Seychelles. Cyprus also made its debut at the Summer Games in Moscow. Earlier in 1980, Cyprus had already participated in the Lake Placid Winter Olympics. Several states, for the first time, took part under their new names: Sri Lanka (formerly Ceylon), Benin (formerly Dahomey) and Zimbabwe (formerly Rhodesia).

Hungarian commemorative stamp of the Summer Olympic Games in 1980, where Hungary participated:

The Olympic torch bearers crossed several Eastern European countries as well as member states of the former USSR: Bulgaria, Romania, the Moldavian SSR and Ukrainian SSR. On Russian territory, the citizens of Belgorod, Orel, Kursk, Tula, Chekov and Podolsk were able to greet and see the Olympic flame passing through. The total length of the relay was 4992 km. 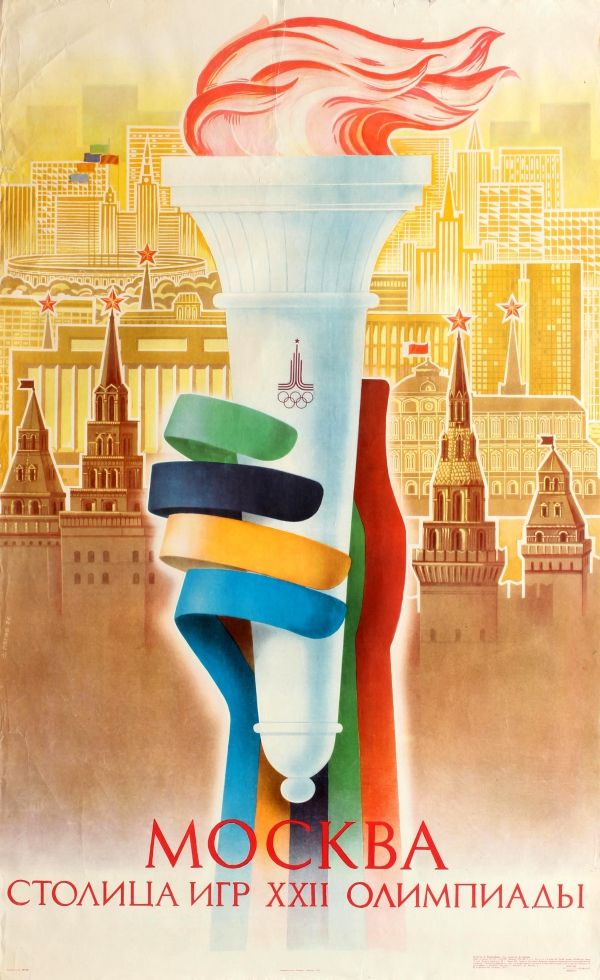 In Moscow the Soviet basketball player Sergey Belov lit the Olympic fire in the cauldron of the Stadium Luzhniki. Sergey Alexandrovich Belov (Сергей Александрович Белов; 1944 – 2013) played for CSKA Moscow and the Soviet Union national basketball team. In 1991, he was named the Best FIBA Player ever. He was also inducted into the FIBA Hall of Fame, in 2007, and became one of the 50 Greatest EuroLeague Contributors, in 2008.

The Stadium Luzhniki has a total seating capacity of 81,000. It is a part of the Luzhniki Olympic Complex, located in the Khamovniki District of Moscow City. The name Luzhniki derives from the flood meadows in the bend of the Moskva River, where the stadium was built. Luzhniki can be translated as «meadows». During the 1980 Olympic Summer Games, it hosted the opening and  closing ceremonies as well as some of the competitions, including the final of the football tournament.

Sergey Belov lit the Olympic fire at the Stadium Luzhniki in Moscow:

Mishka, the Russian bear, was chosen as mascot for the Moscow Olympics. Mishka was the first mascot of a sporting event to achieve commercial success in merchandise. The Mishka doll was used extensively during the opening and closing ceremonies. It also appeared on several Soviet merchandise products and had both an animated short film, animated by Soyuzmultfilm, and a television series, animated by Nippon Animation. Mishka is a short form of the Russian name Mikhail.

The mascot was  designed by Victor Alexandrovich Chizhikov (Виктор Александрович Чижиков), born in 1935. He is a Moscow illustrator of more than 100 children’s books. Victor Chizhikov joined the Union of Soviet Journalists, in 1960, and the Union of Soviet Artists, in 1968. He has acted as chairman of the jury for the Tik-Tak children’s drawing contest held by the Mir TV company, since 1994, and as chairman of the Russian Children’s Book Council, since 2009. The artist’s works are exhibited in the collection of the Alexander Pushkin State Museum of Fine Arts in Moscow. 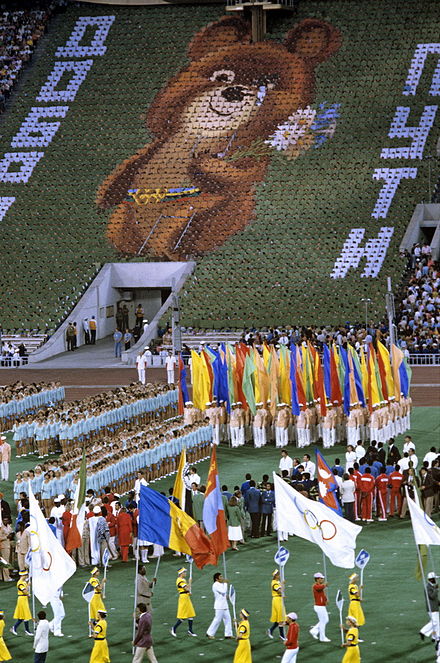 Many new sports complexes and Olympic venues were built in and around Moscow, some of them are still in use. Other buildings were constructed to improve the infrastructure. They are still of great importance today, for example Terminal 2 of the International Airport Sheremetyevo.

This is one of the four main airports in Moscow and the Moscow region, the first in Russia in terms of passenger traffic. It is included in the list of the twenty largest airports of Europe and the fifty busiest airports of the world. Sheremetyevo is the home base of Russia’s national carrier, Aeroflot Airlines. The airport is located northwest of Moscow, on the territory of Khimki.

Human Pyramid at the Opening Ceremony: 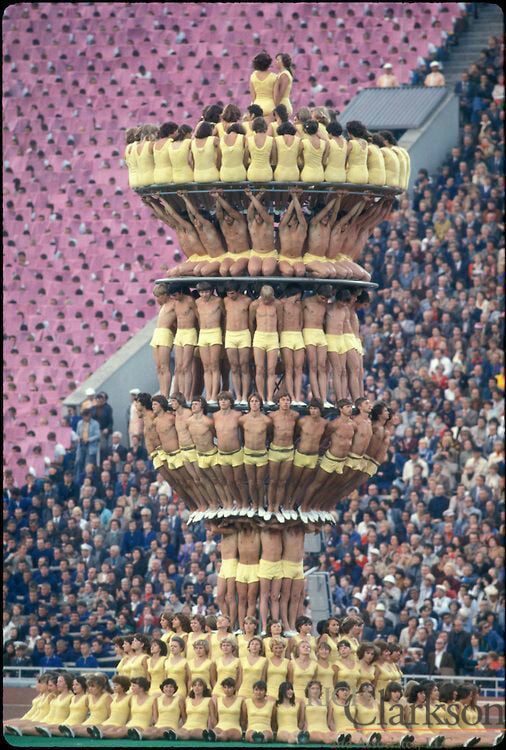 In some of the Olympic sports, where Soviet athletes particularly excelled, they won a great number of gold medals: athletics (15); wrestling (12); gymnastics (09); swimming (08); weightlifting (05); canoe (04); cycling, equestrian, fencing and shooting (03 each); diving, judo, pentathlon and volleyball (02 each). 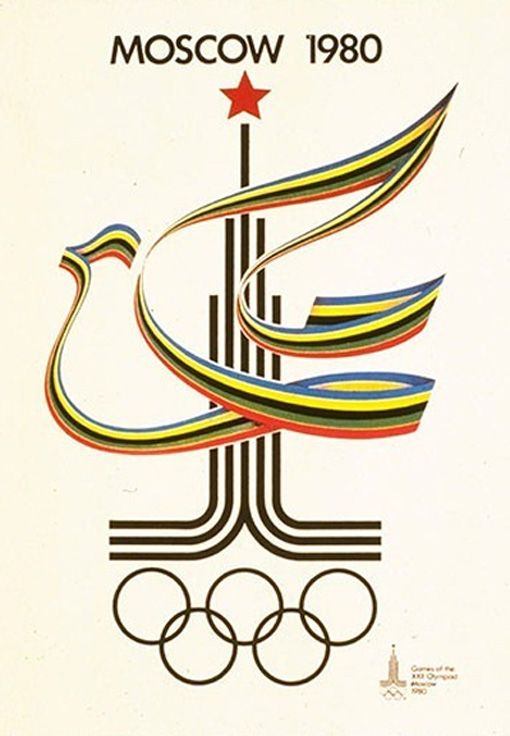 Alexander Nikolaevich Dityatin (Александр Николаевич Дитятин), born in 1957,  became the first athlete to win eight medals at a single Olympiad, with three gold and four silver medals, as well as a bronze medal. The gymnast is a three-time Olympic champion, seven-time world champion and one of the best gymnasts of all times.

He received the Soviet Badge of Honour, in 1976, and the title Honoured Master of Sports of the USSR, in 1979. One year later, he was awarded the Order of Lenin. In 2004, Alexander Dityatin was included in the Gymnasts’ International Hall of Fame. In 2014, he was named Honoured Worker of Physical Culture of the Russian Federation. 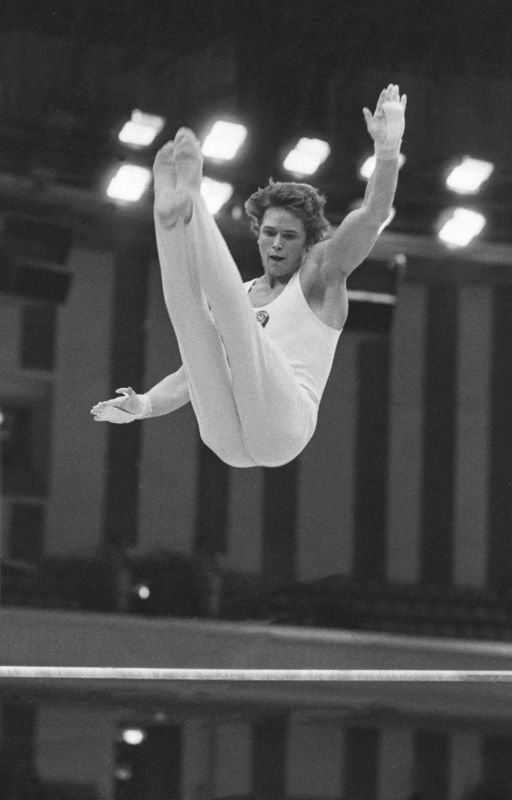 The closing ceremony of the Games of the XXII Olympiad took place on the 3rd of August with songs, fireworks and Mishka waving goodbye. The white Olympic flag was slowly lowered to the sounds of the Olympic anthem. Girls in white tunics came up to the chalice with the Olympic flame. While E. Artemyev’s song “Sport – Eternal Progress” was played, the girls formed a composition reminiscent of an ancient Greek fresco and the Olympic flame in the bowl slowly died out.

On the screen in the background of the stadium the image of Mishka appeared with the inscription “Bon voyage!” A tear rolled from the bear’s eye. An orchestra entered the arena of the stadium to play a series of marches. Athletes synchronously performed sports exercises. At the very end of the closing ceremony, Mishka surfaced again to the song “Goodbye Moscow,” sung by Lev Leshchenko and Tatyana Antsiferova. The image of the bear slowly rose above the stadium, until it disappeared into the sky. 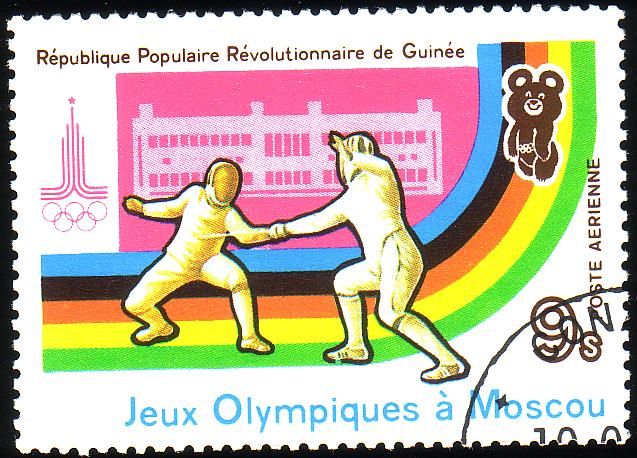 Tatyana Antsiferova is a Soviet and Russian pop singer with a lyric-dramatic soprano voice. She was born in Sterlitamak, Bashkir SSR, on the 11th of July, 1954. Tatyana Antsiferova’s father graduated from the Kharkov Institute of Transport Engineers and was sent to work in Bashkiria. Until the age of 8, Tatyana lived in Sterlitamak. Later she left with her parents to return to Kharkov in the Ukrainian SSR, where she started her successful singing career.

Performer Lev Leshchenko was born in Moscow, on the 1st of February 1942. His father, Valerian Andreyevich Leshchenko (1904–2004), was a Red Army officer at war outside of Moscow. In his childhood, the singer was influenced by classical music and began performing popular songs. In April 2020, Lev Leshchenko was diagnosed to be infected with the coronavirus.

The composer of the song «Goodbye Moscow» is Alexandra Nikolayevna Pakhmutova (Александра Николаевна Пахмутова). She was born in Beketovka, now a neighbourhood of Volgograd, on the 9th of November, 1929. This composer has remained one of the best known figures of Soviet and later Russian popular music, since she first achieved fame in her homeland, in the 1960s. She was named People’s Artist of the USSR, in 1984.

Besides many other awards and medals, which she received in her very long and successful career, Alexandra Pakhmutova became a Honorary Citizen of Volgograd (1993), of Bratsk (1994) and of Moscow (2000). At a gala evening in the Bolshoi Theatre to mark Alexandra Pakhmutova’s 90th birthday anniversary, President Vladimir Putin congratulated and  awarded her the Order of Saint Andrew the Apostle (Kremlin.ru, 10.11.2019). 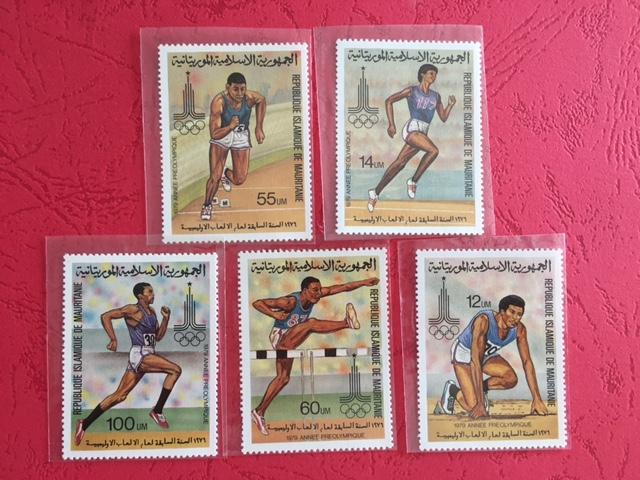 President Vladimir Putin said in his congratulating speech: «Dear Ms Pakhmutova, I would like to thank you for everything you did for our country and our people. Many generations of our citizens live their lives with your music. I know that you compose different kinds of music – for symphony orchestras, music for ballets and choir music. However, the music you wrote for songs is most widely known among our people and it penetrates our very souls …»

What Russia’s President said about music is also true for sports. Just as music penetrates the souls of human beings, sports penetrates the bodies and hearts. This is why sports is so important for people. Famous sportsmen are adored and venerated all over the world. Let’s hope that the next Summer Olympiad in Tokyo 2021  will be a happy event for all nations worldwide.

This article also appeared in THE DURAN:

Olympic Games now and then: Remembering the Summer Olympiad 1980 in Moscow

The Italian translation of this article was published in THE SAKER ITALIA:

4 respuestas a Olivia Kroth: OIympic Games now and then – remembering the Summer Olympiad 1980 in Moscow