Anna Petrovna Ostroumova (Анна Петровна Остроумова) became famous as a Russian engraving, graphic and water colour artist as well as a landscape painter. She was born in Saint Petersburg, on the 17th of May 1871, and died in the same city, which was called Leningrad during Soviet times, on the 5th of May 1955. Anna was the daughter of Senator and Private Councilor Pyotr Ivanovich Ostroumov and his wife Maria Klimentievna Chekhovich. After her marriage to the Russian chemist and inventor Sergey Vasilyevich Lebedev, in 1905, she signed her work under the name of Anna Petrovna Ostroumova-Lebedeva (Анна Петровна Остроумова-Лебедева). Saint Petersburg on the Baltic Sea was founded by Tsar Peter the Great, in 1703. Built on marshy ground on the banks of the Neva River, it is often called «Venice of the North» because of its many canals and little islands. The visionary dream and heritage of a great Tsar is the true hero of Anna Petrovna Ostroumova-Lebedeva’s lifetime work.

From 1889 to 1892, she attended the Central School of Technical Drawing of Baron Alexander Ludvigovich Stieglitz, where she studied graphic art in the class of Vasily Vasilyevich Mate. She continued her studies at the Saint Petersburg Academy of Arts, until 1900. Here her teachers were Ilya Efimovich Repin, Konstantin Apollonovich Savitsky and Pavel Petrovich Chistyakov.

Subsequently, Anna explained her addiction to woodcuts: «Many times in my life I asked myself, why I paid special attention to engraving and subsequently fell in love with such a difficult art as the woodcut that required so much attention and patience. Why? In part, I attribute this to my vision. I was born short-sighted. If an object – the page of a book or a sheet of music – was even a short distance from me, I could hardly read it. But close up I saw the smallest of things clearly, like threads of tissue or nearly imperceptible fibres of paper. Such a vision is very convenient for woodcuts, as it does not require the use of a magnifying glass.» 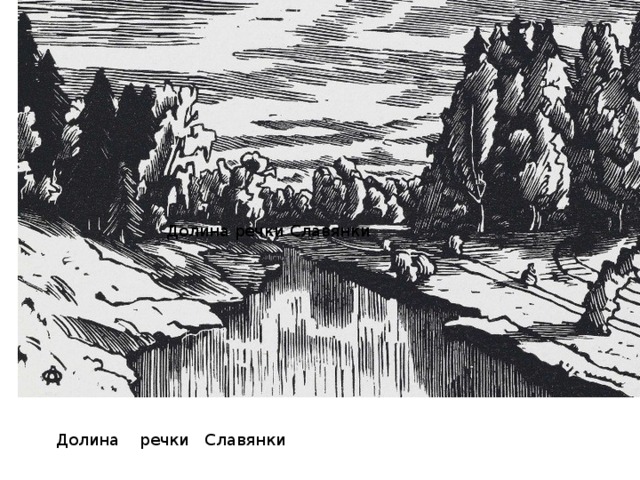 It seems, however, that this was not the only reason. Anna perceived the artistic value of woodcuts and understood its possibilities: “I appreciate the incredible conciseness and brevity of expression in a woodcut. I like the clarity of its lines … I have always regretted that after its brilliant flourishing, in the 16th and 17th centuries, this art began to vanish. And I have always dreamed of reviving it.»

In 1898, Anna began to participate in the activities of the new Russian association «World of Art», founded by Alexander Benois. The representatives of this association rejected academicism, they were searching for what they called «pure art» and the «transformation of life.» She met Alexander Benois (1870 – 1960) and his friends at the Hermitage Museum in Saint Petersburg. 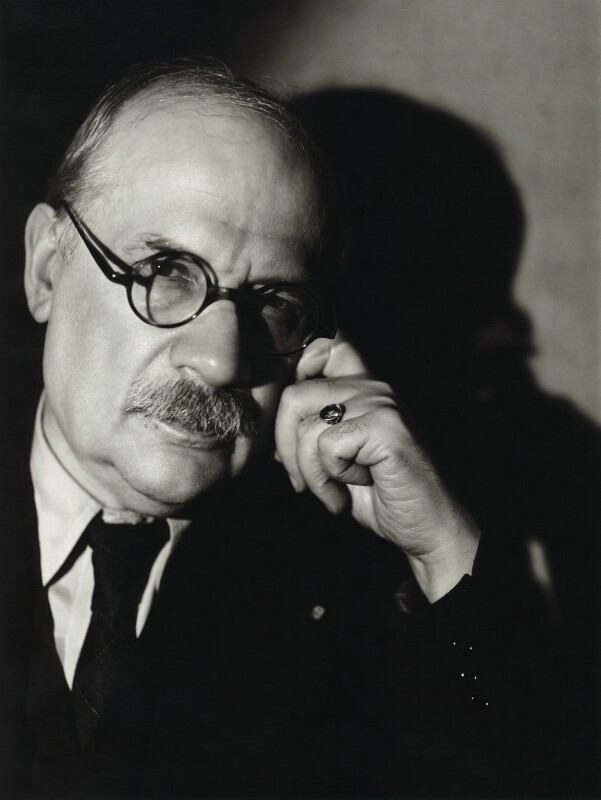 Alexander Benois later recalled: “The Hermitage was empty in those years. On weekdays, we were usually almost the only visitors in the entire gigantic building, which consisted of dozens of vast halls and offices. At the same time, a few steps away from us and in the same section of the Great Rembrandt Hall a young, pretty artist was working on a copy of the painting by the great master.»

«She intrigued us», Alexander Benois said. «This young lady was carrying out her task with skill and strength … We bowed to her from a distance, as we did not dare to approach her. Subsequently, this artist became one of our closest friends, our wonderful Anna Petrovna Ostroumova.»

Later, Alexander Benois described Anna’s work this way: “Her engravings show a strong stroke, bringing her impressions to an extreme degree of convincing laconicism to convey the desired mood. The brush stroke in her water colours pleases the eye with enchanting shine. She has such a peculiarly good taste, she surely possesses God’s grace.» 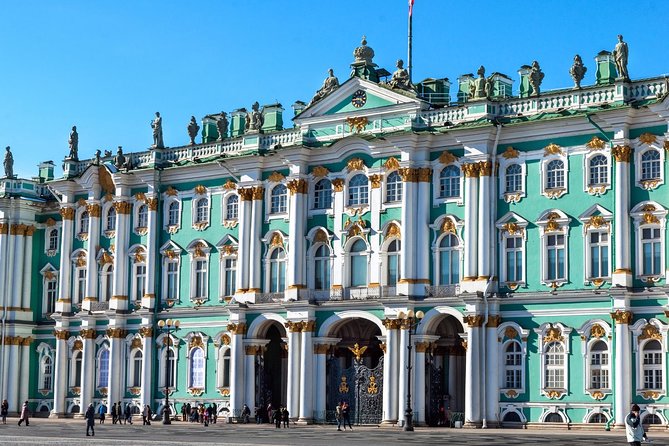 Anna loved her native city. She wrote about her work: “While depicting vast squares with magnificent buildings, brilliant ensembles or embankments stretching into the distance, I studied the laws of perspective. I tried to emphasize the harmony of these buildings with unmistakable vertical lines.»

She liked to take long walks through Saint Petersburg to view it from different angles: “When I was studying at the Academy, I had to walk a long way home every day. I walked across the Neva, past great monuments. These were my first independent steps as an artist. The image of my hometown was clear in my artistic perception. What an enchanting model I had in front of me!» 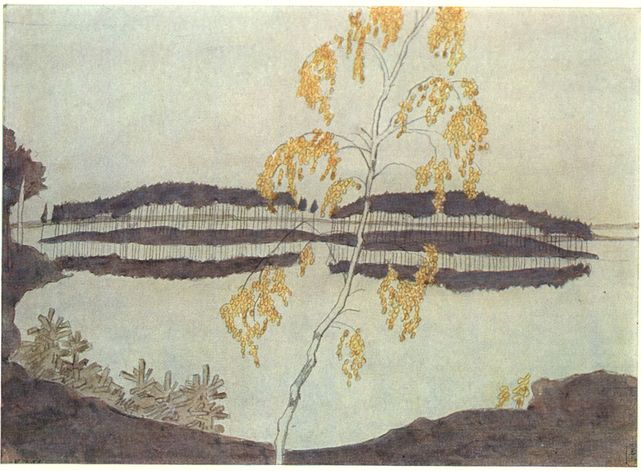 Anna created pictorial and graphic works, characterized by refined decorativeness, stylization and ornamentation. In 1901, she produced the first series of woodcuts with Saint Petersburg cityscapes, ordered by Sergey Diagilev. Her work features the embankments of the Neva, Fontanka and Moika, the Kryukov Canal, the famous Chain Bridge, the Stock Exchange, the Rostral Column and New Holland.

The Kryukov Canal (Крюков канал) was named after the contractor Semyon Kryukov. It runs from the Admiralteysky Canal to the Fontanka River. This Canal was originally dug in 1719 for transport purposes. Its granite embankments were built, from 1801 to 1807. 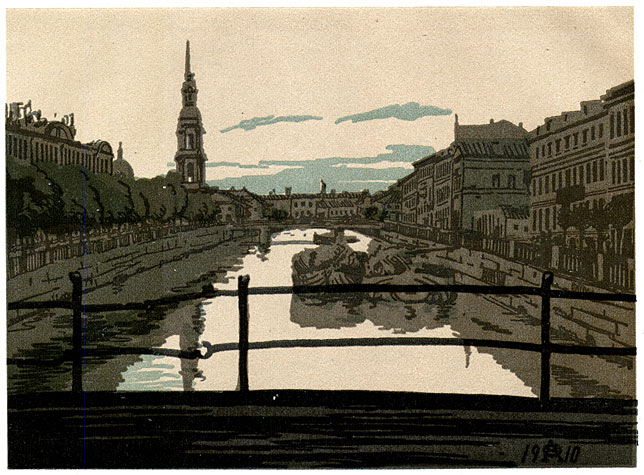 The artist also fell in love with Pavlovsk Park in Saint Petersburg, in 1901. “Until this year,” she later recalled, “I didn’t know Pavlovsk and its magnificent park very well. It was delightful and charming, especially in spring, with its lakes, rivers, bridges, secluded gazebos on the islands. I walked along a path and suddenly I arrived at some ancient temple.» She painted a lot in Pavlovsk Park, mostly water colours, then she created a small series of engravings.

Pavlovsk Park (Павловский парк), surrounding the Pavlovsk Palace, is an 18th-century Russian Imperial residence, built by Tsar Paul I. After his death, it became the home of his widow Maria Fyodorovna. Today, it is a state museum and public park with an area of about 600 hectares. The park is decorated with various pavilions: Apollo’s Colonade, Aviary, Cold Bath, Pink Pavilion, Round Hall, Temple of Friendship. The Pavlovsk Palace and Park ensemble are a federal cultural heritage site of the Russian Federation.

«Statue of Tsar Paul I in Pavlovsk Park», woodcut by Anna Petrovna Ostroumova-Lebedeva: 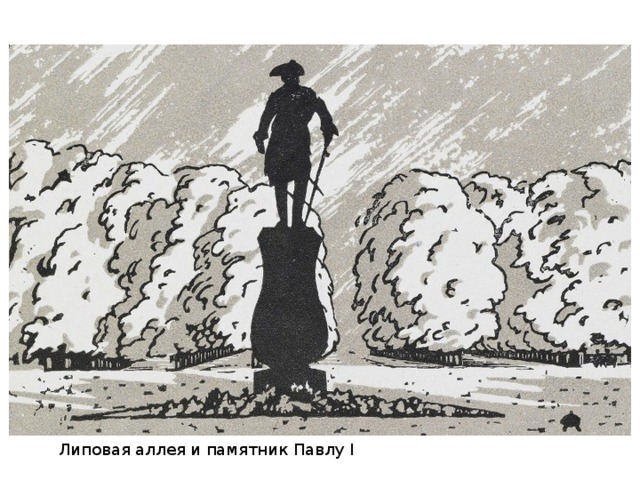 In 1905, the artist married the chemist Sergey Vasilyevich Lebedev (Сергей Васильевич Лебедев, 1874 – 1934). He invented polybutadiene synthetic rubber, the first commercially viable and mass-produced type of synthetic rubber. He also developed an industrial method for producing synthetic rubber based on polymerisation of butadiene, using metallic sodium as a catalyst. This method became the base for the Soviet industry of synthetic rubber.

Due to his invention, by 1940 the Soviet Union had the largest synthetic rubber industry in the world, producing more than 50.000 tonnes per year. Another important contribution of Lebedev’s was the study of the kinetics of hydrogenation of ethylene hydrocarbons and the development of a number of synthetic motor oils for aircraft engines. Besides Pavlovsk Park, Anna also liked the Summer Garden. She often worked there in summer and winter: «I worked with great enthusiasm in the Summer Garden, drawing branches and dancing snowflakes between them. Sometimes I printed garden motives in silvery-gray tones, in a light fog. Sometimes I made the sky appear lighter, as if the sun was about to break through, and I printed the tree trunks darker. It turned out to be a cheerful, vigorous landscape.» 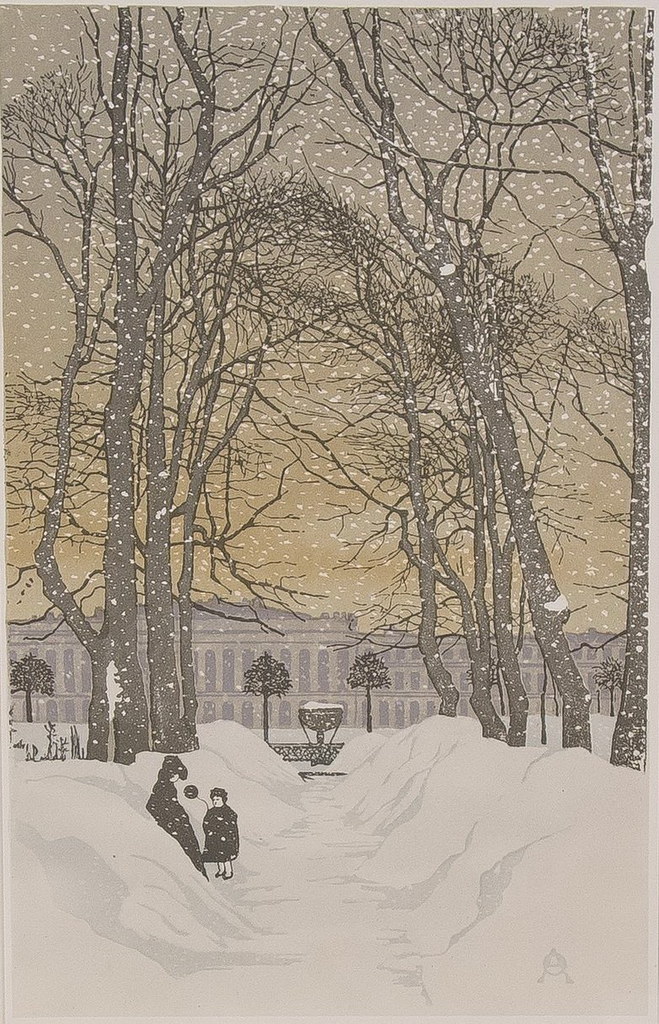 The artist exhibited her work in many Russian cities. The Tretyakov Gallery in Moscow acquired five of her engravings, as soon as they came out. In 1916, the Russian Museum in Petrograd (Saint Petersburg) acquired nine of her works. At the end of 1916, she was the first woman to be nominated as a full member of the Imperial Academy of Arts in her native city.

From 1918 to 1922, Anna Petrovna Ostroumova-Lebedeva held the post of a teacher at the Higher Institute of Photography and Photographic Engineering, now called the Saint Petersburg State University of Film and Television. In her private time, the artist portrayed her black and white dog Bobby.

In the 1930s, Anna and Sergey were able to secure a nice flat in Tsarskoe Selo. It had an attic and a balcony overlooking the spacious garden. From 1934 to 1935, Anna taught at the Saint Petersburg State Academic Institute of Fine Arts, Sculpture and Architecture, the present-day Imperial Academy of Arts.

After her husband’s death, in 1934, and during World War II (1941-1945), which is called the Great Patriotic War in Russia, Anna remained in Leningrad, where she witnessed the Nazi siege. Anna continued to create paintings and was engaged in social work. She never showed any images of the siege but presented her native city in all of its beauty, to be remembered forever. In 1944, wenn the blockade ended, Anna painted the «Salute on the Neva River», a firework of happiness and relief. 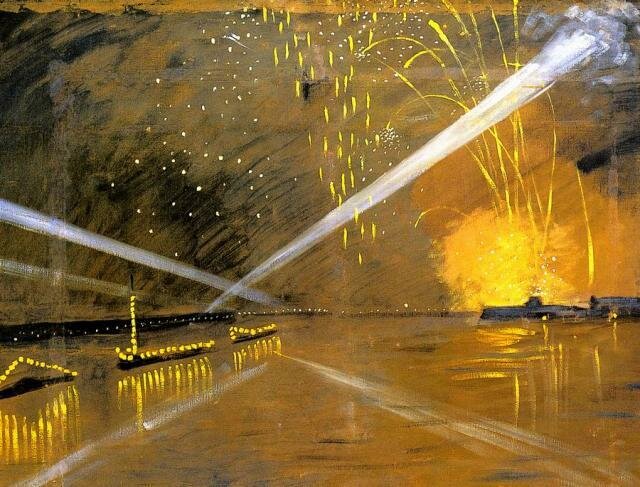 The blockade of Leningrad (блокада Ленинграда) lasted from the 8th of September 1941 until the 27th of January 1944. It was an attempted genocide, due to the systematic starvation and intentional destruction of the city’s civilian population by the fascist German Wehrmacht. The two-and-a-half-year siege caused the greatest destruction and the largest loss of life ever known in a modern city.

People died of famine in the Leningrad region, due to the disruption of energy, utilities, water and food supplies, especially in the winter of 1941/1942. From November 1941 to February 1942, the only food available to the citizens was 125 grammes of bread per day. Half of this so-called bread consisted of sawdust as a filler.

Inhabitants of Leningrad during the Nazi blockade: To sustain the defence of Leningrad, the Red Army established a route for bringing a constant flow of supplies into the besieged city. This route became known as the Road of Life (Дорога жизни). Transport across Lake Ladoga was achieved by means of watercaft during the warmer months and land vehicles driven over thick ice in winter. This route was also used to evacuate civilians.

According to the Soviet General Georgy Konstantinovich Zhukov (Георгий Константинович Жуков, 1894-1976), «before the blockade, Leningrad had a population of 3.385.000 inhabitants, including the suburbs. As many as 1.743.120 people were evacuated between June 1941 and March 1943. They were moved to the Volga area, the Urals, Siberia and Kazakhstan.»

Seventy five years after the Siege of Leningrad: The Neva River in Saint Petersburg – Petrograd – Leningrad, with its shimmering lights and shadows under a blue, grey or black sky, has always been fascinating for artists as well as poets. This is what the Russian poet Bella Akhmadulina (Белла Ахмадулина, 1937–2010) had to say about «the space between the sky and the Neva»:

Anna Petrovna Ostroumova-Lebedeva received many awards, including the Medal «For the Defence of Leningrad» and the  Medal «For Valiant Labour in the Great Patriotic War 1941–1945». In 1946, she was made a People’s Artist of the USSR and given the «Order of the Red Banner of Labour.»

Before her death, she bequeathed all of her artistic heritage remaining in her property to the Russian Museum. Anna Petrovna Ostroumova-Lebedeva died at the age of 84, on the 5th of May 1955. She was buried next to her husband in the Necropolis of Artists at the Alexander Nevsky Lavra.

A modest tombstone was installed for her next to the monument of her husband Sergey Lebedev, in 1956. it was made according to the sketch of the Moscow artist Nikolai Vasilyevich  Sinitsyn (1912-2000), one of her former students, who also paid for the work from his own funds. Like his teacher, he became a master of woodcuts.

In 2016, an exhibition at the Russian Academy of Arts showed the works of Anna Petrovna Ostroumova-Lebedeva and Nikolai Vasilyevich Sinitsyn: «From Saint Petersburg to Moscow. The friendship of two engravers.» These two amazing artists and extraordinary craftspeople will not be forgotten in the future.

Olivia Kroth: The journalist and author of four books lives in Russia.

Remember! Once warmth was without fire.