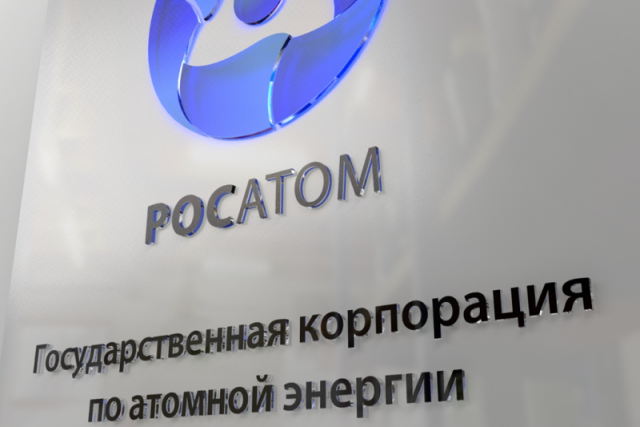 In spite of western sanctions, Russia’s Rosatom is the world’s number two in uranium reserves and has become number one globally in the implementation of nuclear reactor projects. Currently, Rosatom is working on six reactor projects in Russia and 36 abroad. Rosatom has acquired 67 percent of the world nuclear plant construction market, the orders portfolio exceeding $133 billion. Rosatom is working on nuclear plants in Turkey, China and Bangladesh, to name just a few of the countries, where Rosatom is present. Rosatom is highly respected as the global technological leader in high-performance clean energy solutions and was also recently named best Russian employer for the year of 2018 by an international headhunter firm. On the 15th and 16th of April 2019, the eleventh ATOMEXPO FORUM was held in Sochi, Russia, upon invitation by Rosatom.

The Russian State Corporation Rosatom (Росатом), established in 2007,  has its headquarters in Moscow. The organization comprises more than 360 enterprises, including scientific research organizations and the world’s only nuclear icebreaker fleet. Since 2016, its General Director is Alexey Likhachev.

Rosatom was ranked number one as best employer of Russia in 2018 by HeadHunter, a top HR management platform and resource centre. In a vote, the company achieved the highest score by employees, candidates and experts out of over 1.000 biggest Russian companies. Commenting on the accolade, Tatyana Terentyeva, HR Director of Rosatom, said:

«We’re immensely proud of this achievement which is a testament to our strong company culture of always putting our people first. The growth of regional and international projects has given employees and applicants the chance to work in multicultural, cross-divisional and cross-functional project teams. Digitalisation, alone, will open vacancies for 1.000 new specialists this year, from software developers to product and data scientists.»

«We believe that the responsibility lies with human capital stakeholders, such as large multinationals, universities and governments to begin discussing the policy response in earnest. We hope that the gathering of these parties at the global Skills Summit, taking place alongside the WorldSkills 2019 Conference in Kazan this August, to address the global skills gap which affects everyone, will be an important starting point from which companies and governments can work together to help solve this issue», she further explained (CISTON PR NEWSWIRE, 28.03.2019). 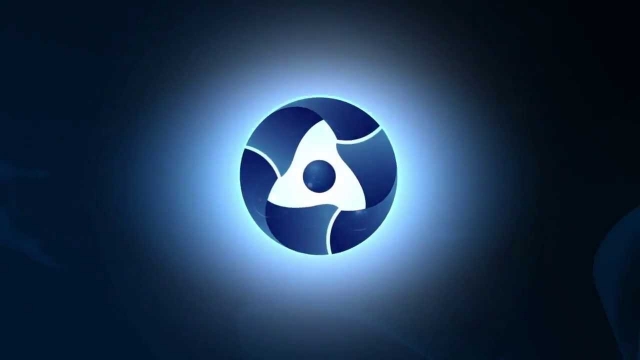 Rosatom is currently constructing the Akkuyu nuclear power plant in Turkey. The laying of the foundation has already been completed. The 17.000 cubic metres of self-compacting concrete foundations are due to be followed by the construction of the exterior and interior walls of the reactor. Construction of the concrete bases for the auxiliary reactors and control room have also begun. The work meets International Atomic Energy Agency safety standards.

Rosatom said the entire first reactor would be finished by the end of the year 2019, with engineering studies for the second reactor already in progress and documentation being prepared to construct the third reactor in Turkey’s Mediterranean province of Mersin.

The Russian nuclear utility is due to build four reactors, each with a capacity of 1.2 gigawatts. The plant is anticipated to have a working life of 8.000 hours per year and produce 35 billion kilowatts of electricity at full capacity. That will meet 10 per cent of Turkey’s electrical demands, according to the Turkish authorities. Akkuyu has an operational date for the first reactor in 2023 with full capacity targeted by 2025 (ENERGY REPORTERS, 15.03.2019).

In China, Rosatom built the Tianwan nuclear power plant, Phase I, Phase II and Phase III.  Now, the company is due to construct Tianwan Phase IV. The general contract has been signed for the construction of two further Russian-supplied reactors at the Tianwan nuclear power plant in China’s Jiangsu province. In addition, a technical design contract was signed for a second pair of reactors at the Xudabao site in Liaoning province.

On the 7th of March 2019, these contracts were signed in Beijing by AtomStroyExport, the engineering division of Rosatom, and China National Nuclear Corporation (CNNC). Rosatom said the contracts had been prepared in accordance with the strategic package of agreements signed during a visit by Russian President Vladimir Putin to China in June 2018. This package defines cooperation between Russia and China in the nuclear industry in the coming decades. 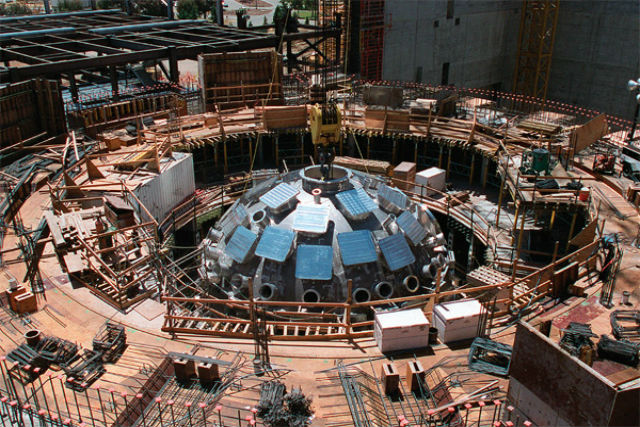 Tianwan Phase I – units 1 and 2 – was constructed under a 1992 cooperation agreement between China and Russia. First concrete was poured in October 1999, and the units were commissioned in June 2007 and September 2007, respectively.

Unit 4 of the Tianwan nuclear power plant, built by Rosatom in China

Another Rosatom construction site is located in Bangladesh. Both Dhaka and Moscow expressed their satisfaction over the progress of construction work of the Rooppur Nuclear Power Plant. The construction is being implemented under an intergovernmental agreement signed between Russia and Bangladesh, on November 2 in 2011.

In December 2015, Atomstroyexport, Rosatom’s subsidiary, was appointed as the general contractor for the construction of the Rooppur plant with two VVER 1200 power units, each with a capacity of 1200 megawatt. In 2015 and 2016, preparatory work was carried out at the construction site, working documentation was developed and licencing documents were prepared.

In 2017, the regulatory authority of Bangladesh (BAERA) issued the required licence for the design and construction of the plant. In July 2018, Unit 2 also went into the active phase of construction, following the «First Concrete». In August 2018, the installation of the «Core Catcher», one of the most important passive safety systems, began at Unit 1. The installation of the «Core Catcher» for Unit 2 began in February 2019. Currently, construction of the main buildings of both power units is underway (DHAKA TRIBUNE, 10.03.2019).

Rosatom has further ambitious plans for NPP construction worldwide. Building a network of nuclear reactors across the world will help to extend Moscow’s influence into global energy markets, as it offers competitive deals and a comprehensive service, including the provision of plutonium. Kirill Komarov, deputy CEO of Rosatom, told the media:

“We are the ultimate leader in the majority of nuclear sectors. The majority of our projects are in the developing world. These are the countries which show the strongest economic growth. China, India, Southeast Asia, countries in the Middle East region. We see countries on the African continent and Latin America.”

Kirill Komarov explains that «Rosatom is offering solutions to developing countries to enable them to negotiate the regulatory challenges involved with going nuclear. Rosatom is a unique company in that we have activities in all areas of the nuclear business; starting with mining of natural uranium, enrichment fuel fabrication, developing our own nuclear equipment, the construction of nuclear power plants, the decommissioning, waste management… everything” (ENERGY REPORTERS, 05.10.2018).

In 2007, Alexey Likhachev joined the Ministry of Economic Development of Russia, where he held a wide variety of leadership positions. Throughout his career, he held senior positions in other governmental bodies and public organizations as well. He was a member of the State Duma, serving as Deputy Chairman of the Committee for Economic Policy, Entrepreneurship and Tourism, from 2000 to 2007.

According to Alexey Likhachev, Rosatom plans to retain its leading role in nuclear power plant construction worldwide, in the decade of 2020 to 2030. The Russian corporation aims to maintain a portfolio of foreign orders for 10 years ahead in the amount of at least $130 billion per year.

«Several years ago, we assumed the leading role on the global nuclear power plant construction market,» Alexei Likhachev said. «The market is moving, so our share on the market fluctuates between 68 and 72 per cent. I think we will be able to maintain it above 60 per cent at least, this is how we see our goals for the  coming decade» (TASS, 13.01.2019). 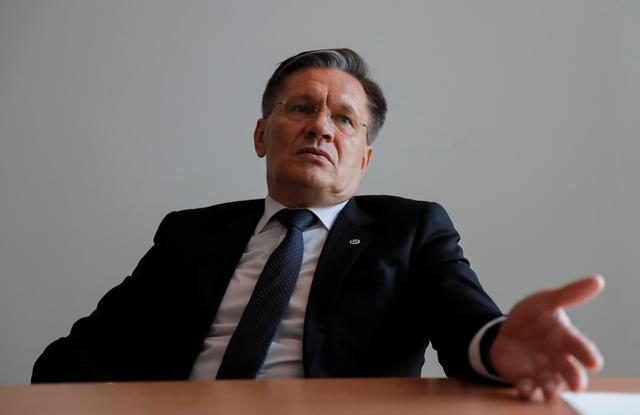 Since the beginning of the 21st century, with President Vladimir Putin coming into power, the Russian Federation has moved upwards, building a vast nuclear empire spanning South and North America, Europe, the Middle East, Africa and Asia. Rosatom is the government corporation behind this enormous expansion, exporting nuclear technology all over the world, thus becoming the world’s leading nuclear powerhouse.

The International Atomic Energy Agency predicts that nuclear power will continue to grow in the next 15 years. The agency’s latest report puts the low margin of growth at 17 per cent and the high at 94 per cent. The Russian Federation is uniquely positioned to capitalize on this projected growth – it has a rich legacy of research and engineering in the field, and has a history of cooperation with countries on all continents.

The Russian Federation is ensuring a steady presence on almost every single continent through the export of nuclear power, expanding its sphere of influence beyond traditional military and hydrocarbon means. It is a geopolitical tool, allowing Russia to tie up strategic governments into long-term cooperation. In this way, the Russian Government is demonstrating its prowess by building nuclear reactors across the world (GEOPOLITICAL MONITOR, 17.05.2016).

With these projects, which guarantee its long term presence in strategic regions, Russia is gaining a strong foothold on the ground. The nuclear power plants require transfer of technological know-how, long-term engagement of scientists, engineers, and diplomats. They are, in a way, also embassies and commerce chambers, which guarantee Russian access to local governments and politicians. The Russian Federation is also opening its universities for students from future nuclear clients and is building networks of cadres across the world.

One of the possiblities for Rosatom to reach foreign government agencies and businesspeople is the international ATOMEXPO Forum, a major event in the global nuclear industry. Upon invitation from Rosatom, the 11th forum took place in Sochi, on the 15th and 16th of April 2019. The forum included an exhibition and a convention with an extensive business programme, centred around a plenary discussion. The forum provided a good opportunity for networking and signing partnership agreements. The forum also offered an entertaining cultural programme with possibilities to visit the beautiful Russian seaside resort of Sochi on the Black Sea and the nearby Caucasus mountains.

Seen in this light, Rosatom functions  not only as a powerhouse exporting nuclear power plants worldwide but also as a corporation of diplomatic and geopolitical importance for Russia.

Text reprinted in THE DURAN: